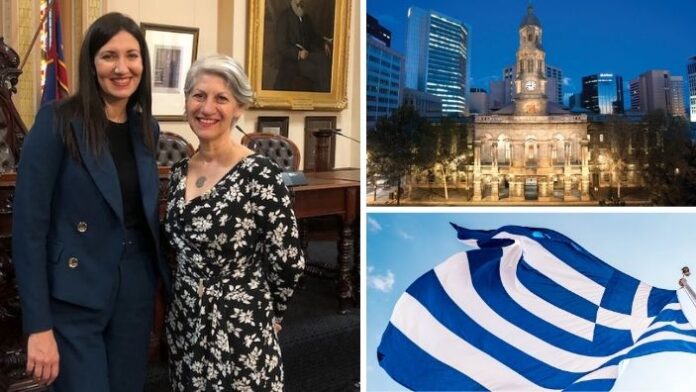 Adelaide’s Town Hall will be lit blue and white and the Greek flag will be flying proudly at the front of the building on March 25 to mark the 200th anniversary of the Greek War of Independence.

“It is our city’s great honour to fly the Greek flag from the Adelaide Town Hall balcony this Thursday, as we join in celebrating the 200 year anniversary of Greek Independence. Later that evening Town Hall will also be bathed in blue and white lighting,” Adelaide Lord Mayor, Sandy Verschoor, tells The Greek Herald.

“It will be a very significant and special day for our Greek friends and I am glad the City of Adelaide can show its support in this way.”

“As with many first generation Greek Australians, the stories of the Greeks winning back their freedom and independence from Turkey in 1821 has been ingrained as part of our heritage with pride,” Ms Couros says.

“I am delighted that the Town Hall will light up with the colours of the Greek flag and flying the flag outside the town hall to celebrate the 200th Anniversary of the Greek Revolution.

“South Australia, and in particular the City of Adelaide, has a long-established Greek community and has contributed considerably to both our character and development of the city.

“Independence Day is very significant to the community and to support the Greek community is a commitment to the multicultural country that we are built on and sending a message that through unity, we should never forget the importance of freedom and democracy.”

The Greek Orthodox Community of South Australia (GOCSA) also welcomed the news with a post on social media.

“SA Hellenic Communities will be celebrating this milestone anniversary side-by-side with Greek communities across the world. South Australia is home to a long-established and flourishing Greek community, one that has contributed considerably to both our character and our development,” reads the message.

The City of West Torrens is also planning a flag raising ceremony on March 25 to acknowledge the Greek community’s contribution.