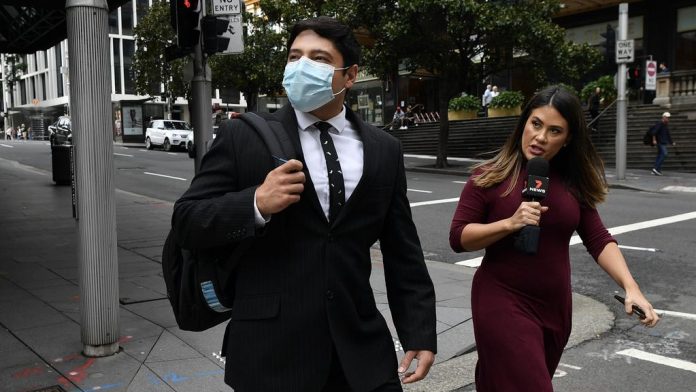 James Delinicolis is one of two Sydney police officers who have plead guilty to misconduct on Thursday.

Senior Constables James Delinicolis, 30, and Angelo Dellosa, 31, of Bankstown Transport Command attempted to pick up women for sex while on duty using fake names and what they call a “bat phone”, according to court documents.

The pair plead guilty to one count related to their sexual encounter with a 17-year-old schoolgirl following an anonymous police complaint made last June.

Downing Centre Local Court heard both men will be sentenced for a single charge of misconduct in public office after downgrading their original charges.

The pair of longtime friends were facing charges of attempted sexual assault and recording an intimate image without consent.

The officers approached at least six adult women for sexual encounters while on duty over 2019 and 2020, a statement of agreed facts reveals.

They used a so-called “bat phone” which they used “when they wanted to communicate with women while on duty” and gave the names “Jamie”, “Dimitri” and “Allen”.

When Delinicolis first spoke to the girl outside a train station in March 2020, he was in a police vehicle in full uniform with three colleagues and she was in her school uniform, the court documents state.

He asked her name, where she lived, whether she was single and how old she was.

The agreed facts make it clear the girl told him she was 18, despite actually being 17.

Delinicolis then “discreetly” handed her a post-it note from inside his police notebook, from where he kept a pile of similar notes, with the name “Dimitri” and a phone number.

“She’s old enough,” he commented to his colleagues, according to the facts.

Delinicolis later exchanged explicit messages and nude photographs with the teen on WhatsApp and suggested meeting up.

He asked her to skip school the next morning, told her “don’t tell your friends” and at one point pressed her for an answer, adding “quick I have to make arrest”.

The court documents describe details of the meeting between the three in a hotel room, including sexual acts which were filmed on a mobile phone.

When she asked Delinicolis whether he had done “this” to other girls, he replied “Yeah, with teenage girls still in school”, according to the documents.

The facts state that as the two officers put on their uniforms to go to work, they told the girl: “Don’t tell anyone because we are police and we might lose our job.

According to the agreed facts, days later, the pair laughed about their encounter in a locker room and when a colleague overheard, they were again warned to “be careful”.

When interviewed, Delinicolis denied being the one who made the initial contact with the girl and lied about having not approached any other women for sex while on duty.

Both Delinicolis and Dellosa had variations to bail conditions to reduce their reporting obligations to one day per week, while Dellosa had a ban on social media removed.

The case returns to court in two weeks.