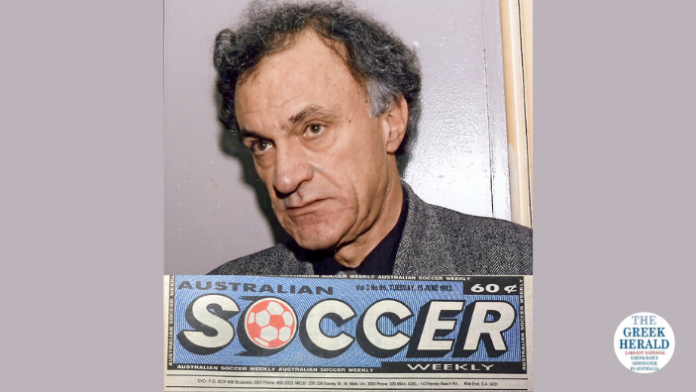 Former editor of the Australian Soccer Weekly and a long-time family member of Foreign Language Publications and The Greek Herald, John Economos, has passed away at the age of 78.

Mr Economos joined the ‘The Australian Soccer Weekly’ in 1980. The Foreign Language Press publication was a football media institution in its heyday, which Mr Economos contributed to for over 25 years.

Anyone that had the pleasure of meeting and working with Mr Economos knew that he had his own amazing and unique style on how to write and tell his football stories.

He was a walking football encyclopedia and touched so many people in his own special way where he made so many friends in the game he loved.

One friend in particular was the great Johnny Warren. Warren took Mr Economos with him on his football journey, from the famous Canterbury ‘Babes’ of the late 1950s, through to the great St George side of the 1970s.

One of Mr Economos’ fondest memories was interviewing the great Pelé, who is the all-time leading goalscorer for Brazil with 77 goals in 92 games. Mr Economos met Pelé four times in total, including once during Pelé‘s first trip to Sydney in 1972.

For his hard working services to the game, Mr Economos was inducted into Football Australia’s Hall of Fame in 2009 championed by the late and great Mike Cockerill, another one of John’s closest friends.

In a statement, Football NSW said they are “saddened” to hear the news of the unfortunate passing” of Mr Economos.

“Football NSW was deeply saddened to hear the news of the unfortunate passing of Football Australia’s Hall of Fame Inductee and one of the nation’s final leading and veteran journalists, John Economos,” the statement reads.