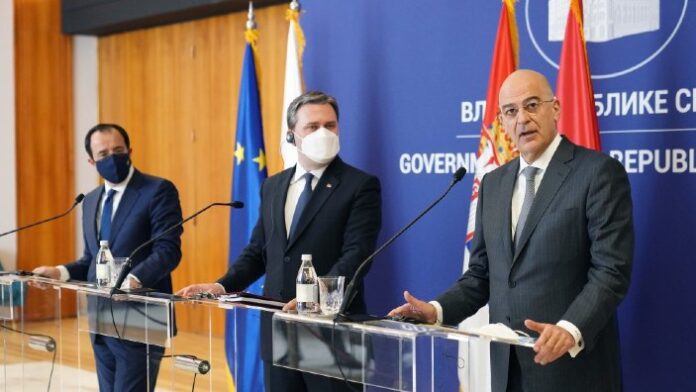 The foreign ministers of Greece, Serbia and Cyprus held their first trilateral meeting in Belgrade on Monday, affirming their commitment to collaboration in the Balkans and the Mediterranean region.

During a press conference, Greek Foreign Minister, Nikos Dendias, thanked his Serbian counterpart, Nicola Selakovic, for welcoming the Greece-Albania initiative to resolve the two countries’ maritime zones issue in the framework of International Law, adding that the East Mediterranean must become a sea of collaboration, not a sea to practice the outdated policy of warships.

“We build our friendships on the framework of International Law,” Dendias said.

He also reiterated Greece’s support for Serbia’s accession to the EU, while noting the importance of continuing talks on the issue of Kosovo.

Dendias also said Greece supports the natural gas interconnection of Serbia with Bulgaria, which will eventually be connected to the Greece-Bulgaria pipeline and later to the Trans Adriatic Pipeline (TAP).

Greece also attaches great significance to the Pan-European Transport Corridor X (10), which will connect Thessaloniki with Salzburg, via North Macedonia and Serbia, he added. The route from Piraeus and Thessaloniki to the north will provide faster transportation and economic benefits.

Dendias also raised the issue of Greece and Cyprus being migration frontline countries in the Eastern Mediterranean and of Turkey’s obligation to control migratory flows from its territory, and to accpet returns from the EU.

“I think that Turkey needs to strengthen its border control and fully comply with its 2016 agreement with the EU,” he said.

Cypriot Foreign Minister, Nicos Christodoulides, underlined that a solution to the Cyprus issue must be pursued on the basis of establishing a bizonal, bicommunal federation, without external interventions.

After the tripartite meeting, Dendias was received by Serbian President, Aleksandar Vucic. He also met with Serbian Parliament President, Ivica Dacic, and with the new Patriarch of the Serbian Orthodox Church Porphyrios.

The next meeting of the three foreign ministers will reportedly be held in Thessaloniki.