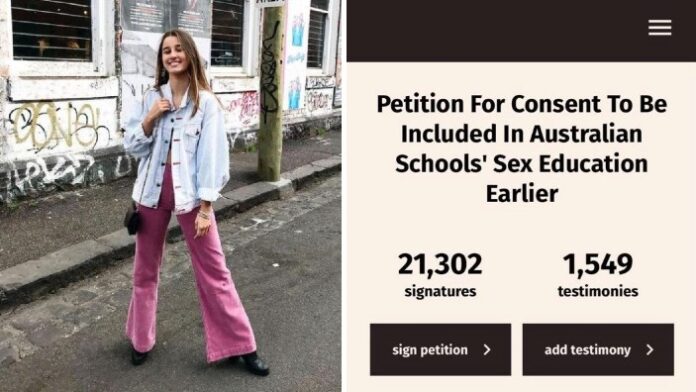 More stories of sexual assault in school communities were published by Greek Australian, Chanel Contos, on Monday night as part of a growing movement to improve sex and consent education in Australian schools.

According to The Sydney Morning Herald, Contos has received more than 4,000 graphic allegations of sexual assault since she launched an online petition calling for earlier sexual consent education across Australia.

Her new website has already published over 1000 of these anonymised student stories, while hundreds of other testimonies which Contos originally shared via a confronting 70-page Google document will also be migrated to the new site.

Thousands more testimonies will be added in the coming weeks after they are screened for identifying details, the Sydney Morning Herald reports.

“The point of this is to scale it, take it nationwide. I want this to continue to be at the forefront of everyone’s mind, the government’s mind, because we need educational reform and societal reform. Everyone needs to be conscious of their contribution to rape culture,” Contos told the Australian media outlet.

Dozens of private schools in both Sydney and Melbourne have now vowed to take stronger action on consent education in response to these claims, with many school principals labelling the testimonies “disturbing, bleak but essential reading.”

Contos said she wanted to retain the sobering effect of that Google document on her website.

“The point of it is to have the dramatic endless scroll, the thousands of testimonies and the thousands of signatures. It is so prevalent in our lives – I want everyone to be shocked, and stunned,” she told the Sydney Morning Herald.

Going forward, Contos’ website (teachusconsent.com) allows people to submit their own stories, sign the petition for better sex education and download templates for emailing their schools or MPs. She also plans to add educational resources for parents and students, as well as resources for victims of sexual assault.

This website comes as both school circles and Parliament House have been reckoning with sexual assault claims over the past month. Prime Minister, Scott Morrison, has been urged to sideline a federal cabinet minister accused of raping a 16-year-old girl in 1988 as authorities investigate, while former Liberal staffer Brittany Higgins has taken her formal complaint over an alleged rape to the police.