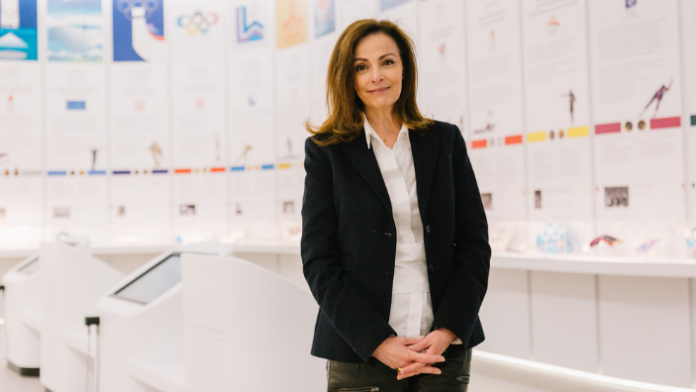 The memories of the Olympic Games in Athens in 2004 are indelibly engraved like a tattoo in the memory of everyone who lived them up close. At that time, 17 years ago, every Greek was “grasping” the feasible possibility of happiness, in that event, where Athens presented the best version of Hellenism.

A version that reminds us of the new-fangled “Athens Olympic Museum“, which opened its gates two months ago, after the end of the second lockdown in the country.

Situated, a walk away from the” Olympic Stadium”, on the first floor of the” Golden Hall”, a few metres from there, where you think the triumphal sounds from the opening ceremony, curated by The Great Master of art, Dimitris Papaioannou.

The Olympic Museum of Athens is impressive. It looks like, as you have the opportunity to see from the photos – secured by the “Greek Herald” – taken from the future, but completely respecting the past.

About a week from the start of the most special Olympic Games in their history, in Tokyo, where the fans will not be on the stands, due to the pandemic, we decided to tour, even conceivably, the impressive Olympic Museum of Athens, guided by its Director, Maria Papaioannou.

We started the tour by asking what are the main goals of the Museum.

“The idea for the Athens Olympic Museum was born in 2004 and 2 months ago we had the pleasure to open its gates for the general public.

The aim of the museum is to present the history of the Olympic Games from antiquity to the present day, to convey the values of Olympism, highlighting the country from which it all began, but also to honor the Greek athletes who have pioneered the Olympic and Paralympic Games.

The Athens Olympic Museum which was designed and implemented by Lamda Development S.A. according to international standards it is under the auspices of the Greek and the International Olympic Committee and is a member of the international network of Olympic museums.

The Olympic Museum of Athens aspires to become an international reference point for Olympism and the Olympic Games and is certainly a museum that one would expect to meet by visiting the country that gave birth to the Games “says Ms. Papaioannou to the “Greek Herald”.

The time travel of the Olympic Games

With international borders closed in Australia, our readers will still long away from visiting the Museum. Ms. Papaioannou, however, offers us a vivid picture of the exhibits and what a visitor will experience.

“The museum narrates the course of the Olympic Games in time from antiquity to today’s Olympiads, the role of our country and Greek athletes.

The feeling that the museum exudes to the visitor is a journey through time, bathed in light. During this trip, the visitor meets natural, interactive exhibits and sports equipment of Greek Olympians and Paralympians which compose an exciting experience.

The journey through time begins, from the origin of the Games, through a chronological narrative that highlights the three main Greek stations:

The Nativity (Ancient Olympia), with the corresponding Hall representing the stadium of Ancient Olympia, making special reference both to the competitions and rules of the ancient Olympic Games, but also to the victory and the winners.

The Revival (Athens 1896), where in the hall with the Representation of the Kallimarmaros Stadium, there are authentic documents of the historical event, and an audio-visual production describing each day of the games, the events that took place and the winners of each event.

The hall of the return of the Games to Greece (Athens 2004), is a strongly emotionally charged point of the museum’s permanent exhibition, as these games have been indelibly imprinted in the memory of the Greeks.

Colorful costumes from the opening ceremony of Dimitris Papaioannou, have received the necessary preservation and are exhibited to the public. It is part of the rare collection from the imposing procession of the opening ceremony, with figures and mythological figures from frescoes and sculptures. Armor, Byzantine costumes, caryatids and other costumes and constructions dominate the space.

Then, special mention is made to the principles and values, the structure of the International Olympic Movement, the organisations and institutions, the message of World Peace, Sports and athletes, the Greek Olympians and Paralympians and finally to the struggle, the constant effort of man to overcome himself, in every aspect of his life. This was the inspiration for the design of the museum.

The timelessness of the Olympic Games is experienced through the story line, one of the most imposing halls that connects the institution with its landmarks and with history. Here is presented the evolution of the Olympic Games with various benchmarks, such as the first time women participated in the games, the first Winter Games, but also the first exclusively Winter Olympics.

An important legacy is the promotion of the Greek medalists Olympians and Paralympians through the presentation of their personal sports equipment, aiming to be a source of inspiration for the next generations” Ms. Papaioannou tells us.

The effort to enrich the exhibits will be continuous, since there is already planning to have souvenirs from the Tokyo Games, when they are completed.

In order to document the exhibits, the museological team collaborated with more than 40 national and international cultural institutions, while in the long term the enrichment of its collection will continue along with continuous participation in the Olympic events and the organisation of various educational programs with the participation of the entire Greek Olympic family.

With the completion of the Tokyo Olympics we intend to enrich our collection with new exhibits. In addition, provision has been made in the space for hosting objects from future Olympiads in order to keep the interest of our visitors active”.

The Olympic Museum of Athens is taking its first steps. Just two months of history, but already it has attracted the interest of all of us.

We asked Ms. Papaioannou if visits to the Museum are satisfactory and if there are any plans to organise events ahead of the Games in Tokyo.

“Certainly opening a museum at a time that we all experience with the pandemic, is a challenge. However, the museum received significant public acceptance during its first two months of operation.

Beyond the general public, Athletes of all sports as well as Olympians who come to donate their personal belongings to its collection have already visited the museum.

It has also been visited by the first school students who, through the educational programs of the museum, will be initiated into the principles and values of Olympism and “fair play”.

Regarding the 2nd part of your question, we are planning a program of actions in view of the Tokyo Olympics which we will announce very soon, always taking into account the measures to protect against coronavirus with the aim of ensuring the health of both visitors and employees of the Museum”…