5 fast facts about the Corinth Canal 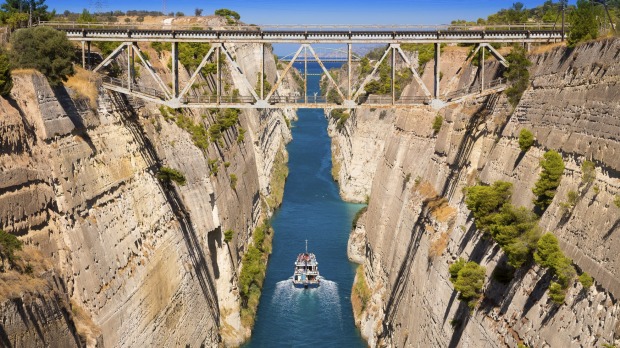 Here are 5 fast facts about the Corinth Canal!

Where is the Corinth Canal?

Who started the construction of the Corinth Canal?

Although construction on the Corinth Canal was not completed until 1893, political leaders and sea captains dreamed about building a canal in this location for over 2,000 years. The first documented ruler to propose a canal was Periander in the 7th century B.C. He eventually abandoned the canal plan but did substitute a portage road, named the Diolkos or stone carriageway. The remains of the Diolkos can still be seen today next to the Canal.

When was the Canal completed?

The government of Prime Minister Thrasyvoulos Zaimis passed a law in 1870 authorizing the construction of a Corinth Canal and a French company was hired to oversee the project. It was not long before money became an issue.

A decade passed, and in 1881 the Société Internationale du Canal Maritime de Corinthe was commissioned to build the canal and operate it for the next 99 years. King George I of Greece was present when construction was begun in April 1882. After eight years of work, it ran out of money.

In 1890, construction resumed when the canal project was transferred to a Greek company. The canal was completed in July 1893, eleven years after construction had begun.

How can you see the Canal?

Second, several private companies depart from Piraeus, the port of Athens, and offer a cruise through the canal.

Finally, cruise ships with a day in Athens often offer a half-day shore excursion to the Corinth Canal for those who have visited Athens before.

How big is the Canal?

The Canal has steep limestone walls that soar about 300 feet from the water level to the top of the Canal but is only 70 feet wide at sea level. Ships must be narrower than 58 feet wide to transit the Canal. This small size was appropriate when the Canal was built in the late 19th century, but it is way too small for today’s cargo and passenger ships.