Activists detained in Greece for protesting violence against women 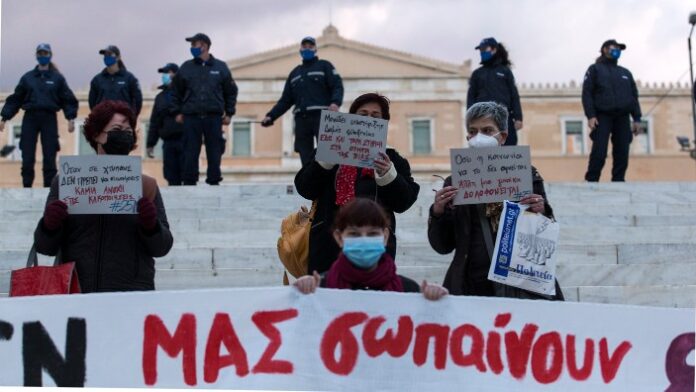 Nine activists were detained in downtown Athens on Wednesday for raising banners on the International Day for Elimination of Violence Against Women.

The women stood at the stairs of Syntagma Square opposite the Parliament, wearing masks and maintaining their social distance.

Their banner read: “They don’t silence us. The quarantine does not protect us from the pandemic of violence against women.”

Several police officers gathered around the activists and ultimately detained the women, taking them to the police station.

Charges are expected to be laid which has angered many as small gatherings are not banned during the lockdown restrictions. Protests and rallies were banned only around the days of November 17.

The protest came after Greece’s first female President, Katerina Sakellaropoulou, called for action towards adopting a zero-tolerance policy on all violence against women, while ensuring support for the victims of domestic abuse.

In a message marking the International Day for the Elimination of Violence Against Women, Sakellaropoulou underlined the need for “a change in family and societal paradigm” through education and counselling.

“It will take time to debunk the stereotypes that originate in gender inequality and which ideologically underpin the phenomenon, often stigmatising the victim instead of the culprit, nourishing a collective tolerance toward actions that are immoral and reprehensible,” she said, adding the law must be strictly enforced in prosecuting cases of domestic abuse.

Prime Minister of Greece, Kyriakos Mitsotakis, also added his voice to the conversation, saying on Twitter: “Unfortunately, there are still many women who do not know the process by which they can escape the nightmare of violence.”

“It is definitely a long journey. But it usually starts with a phone call. And it takes courage to take that first step,” Mitsotakis wrote.

To end the day, the Greek Parliament building was also lit up in orange with the slogan “No to Violence.”