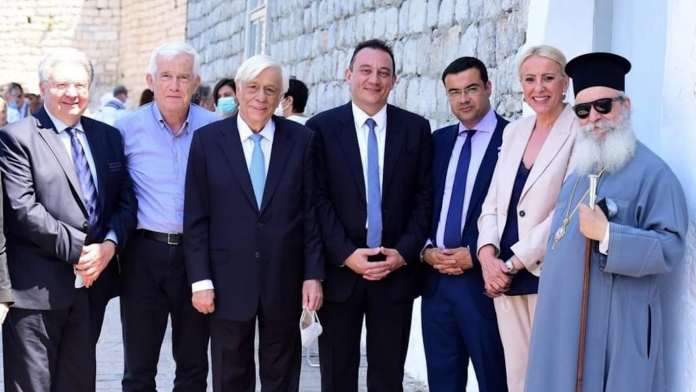 Freedom of expression and its deep roots in the values and principles of culture that are associated with the Greek language, through inseparable links, is the main message that was highlighted from the work of the 7th International Summer University “Language & Freedom of Expression”, in the “Melina Merkouri” Auditorium in Hydra, with the presence and participation of VIP guests.

The program was organised by the Laboratory For the Study of Social Issues, Mass Media and Education of the Department of Early Childhood Education of the School of Education Sciences of the University of Ioannina in collaboration with the Modern Greek Studies Program of the Department of Media, Communications, Creative Arts, Language, and Literature of Macquarie University, in Sydney Australia, and with the participation of The Circle of Hellenic Academics in Boston.

The 7th International Summer University was part of the bicentennial anniversary program for the 200 years from the Greek Revolution and was completed under the auspices of the Municipality of Hydra. The General Secretariat of Hellenes Abroad and Public Diplomacy of the Ministry of Foreign Affairs supported it. With international participation from all over the world, it was also live streamed.

The 7th International Summer University had as a main focus this year the “Language & Freedom of Expression”. All the proceedings of the program are planned to be published in 2022 in Australia.

During the commencement of the 7th International Summer University, they were present Mr Prokopios Pavlopoulos, Former President of the Hellenic Republic, the Deputy Minster of Foreign Affairs, Responsible for Abroad Hellenism, Mr. Konstantinos Vlassis, the General Secretary of Hellenes Abroad and Public Diplomacy of the Ministry of Foreign Affairs, Prof. Ioannis Chrysoulakis, the Mayor of Hydra, Mr. Georgios Koukoudakis, Assistant Professor of Strategic Analysis at the Military School of Guards, Mr. Triantaphyllos Albanis, Chancellor of the University of Ioannina, Professor of the Department of Chemistry of the School of Sciences (via distance), and also the Vice-Chancellors, Mr. Minas Pasxopoulos and Mr. Stavros Nikolopoulos (University of Ioannina) and Mrs. Zoe Gavriilidou (Democritus University of Thrace), the Deans Mrs. Jenny Paget (University of Ioannina), Mrs. Pinelopi Vougioukli-Kampaki (Democritus University of Thrace) and Mrs. Stavroula Tsiplakou (Open University of Cyprus), the Head of the Department of Early Childhood Education of the University of Ioannina, Mrs. Aikaterini Plakitsi, the shipowner and Presidents  of the Aikaterini Laskaridi Foundation, Mr. Panos Laskaridis, the Spokesman for the U.S. Embassy, Mr. Torrey Goad, and more. It is worth to be noted that also Professors and researchers participated from 17 academic institutions from Greece and from abroad. The participation of the academics from Australia was impressive.

Prof. Martina Möllering, Executive Dean of the Faculty of Arts of Macquarie University, a contemporary philhellene, spoke in fluent Greek emphasising the fact that ‘This collaboration aligns with Macquarie University’s strategic international collaborations and valuable external outreach and that it gives the opportunity to the diaspora of Australia -and not only- to communicate with the academic community of Greece on the current topic “Language and freedom of expression”, which highlights the essence of language’.  The President of the Greek Studies Foundation Limited, Mr Theofilos Premetis in his speech proposed the 7th International Summer University to be the beginning of innovative collaborations between Macquarie University and the University of Ioannina and closed with verses from Cavafy’s famous poem “200 BC”. Dr Patricia Koromvoki, Head of the Modern Greek Studies Program, sincerely thanked Associate Professor N. Tsitsanoudi – Mallidis for her honorary invitation of this collaboration. Dr Koromvoki’s academic presentation focused on the development of the transferrable skill of creativity in learning and teaching Modern Greek as a foreign / second language.

In her greeting, the Founder and Academic Director of the International Summer University, Mrs. Nikoletta Tsitsanoudis-Mallidis, Associate Professor of Linguistics & Greek Language (University of Ioannina), spoke of “a strong institution that functions as a counter-creative to the very difficult period we live in, and which is strengthened by international synergies, but also from the involvement and participation of young people, to whom the only way is to give them the next step for the next day”. The Mayor of Hydra, Mr. Georgios Koukoudakis, offered to the founder of the International Summer University the medal of “Hydra 1821-2021”. Also, Mrs. Tsitsanoudis-Mallidis offered to the guests a symbolic gift from the University of Ioannina.

The work of the academic activity continued with long-hour morning classes and evening cultural outdoor events, which included a theatrical performance, a music concert dedicated to Leonard Kohen and book presentations, as well as an event at the Holy Diocese of Hydra, Aegina and Spetses with the participation of His Eminence Metropolitan Mr. Ephraim. The International Summer University was completed with an online discussion between Mrs. Nikoletta Tsitsanoudis-Mallidis and Mrs. Polly Samson, wife of Mr. David Gilmour, for her novel ‘The theatre of dreamers’ (Bloomsbury Publications), that was referred as the novel of the year 2020 from The Times, Sunday Times, The Telegraph, The Daily Mail και The Spectator.