5 islands in Greece that have the heart of the locals 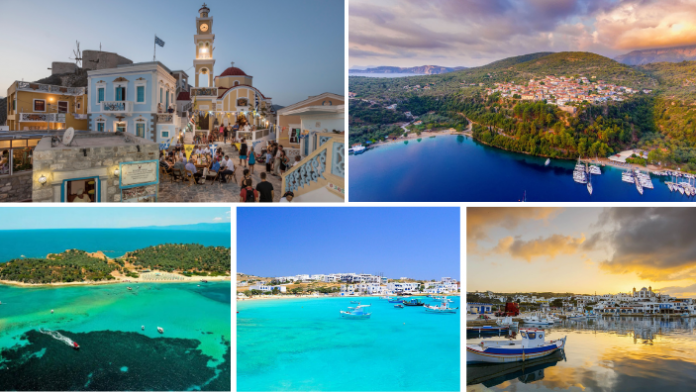 With over 6,000 estimated islands in Greece, it is easy to say that you probably couldn’t see them all in one lifetime.

We are making the list easy with these 5 must-see islands in Greece that have yet to be found by the mountains of tourists that visit each year, and are crowd favourites of the locals.

Nestled between the two peaks of the Halkidiki peninsula in the North-East Aegean, Ammouliani is a beautiful escape from the larger tourist attractions of the mainland.

Its incredible sandy beaches and local visitors from all parts of Greece make the island all the more peaceful, ensuring you’ll never want to leave.

There is plenty to do with the most popular of attractions being a boat trip around Mount Athos, which is the closest some of us will get to the monastery, especially if you’re a woman as only men are allowed on Mount Athos.

Just a short boat ride across the water from the Ionian island of Lefkada, Maganisi can be easily missed if you don’t know it’s there. In fact many people only visit on day trips from larger islands.

Staying in town though, means you have the freedom to explore the many things this little island has to offer, from tavernes to beaches and contemporary apartment accommodation that will make you want to extend your trip.

One being of course Limonari, the Ionians best kept secret. A beach with sand so white, you’d think it was painted! Most beaches can be reached by foot or by boat, either way it’ll be a trip that steals your heart.

Koufonisia is actually made up of three islands, although only one is inhabited. The destination is commonly visited by the local Greeks who come from other islands close by or even the mainland.

You can easily take a boat ride to the other two islands of Koufonisia for the beaches and Keros, where the incredible Cycladic statuettes were discovered. These are able to be viewed now in Athens.

Although being the second largest of the Dodeconese islands, Karpathos is the lesser known of its tourist attraction island cousins, Rhodes and Kos.

Said to have been inexplicably neglected by tourists, Kaparthos may not be as immediately attractive as some of the other Greek islands but its beauty lies deeper into the main town’s atmosphere and feel.

One of the town’s must see attractions is a visit to the village of Olympos, high in the mountains where the women dress in traditional costumes and the view is second to none.

At just 8km wide, this small beauty, nestled nicely in the Dodecanese, offers some of the most beautiful beaches you will see. You won’t find many tourists here, but you will discover Greece in its purest form in the main village town.

Locals say that the island got its name because it is where the beautiful nymph Calypso detained Odysseus, delaying his trip home to Ithaca by several years.

Due to the bright white pebbles and incredible rock formations on the beach, a boat trip is usually preferred as it is easier to access the beach rather than by walking.