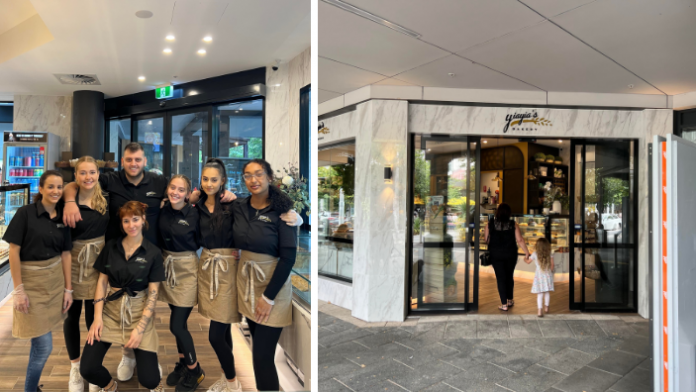 Picture this: A shop filled with Greek sweets such as bougatsa, baklava and galaktoboureko, as well as savoury food like moussaka, pastitsio and spanakopites.

If this hasn’t already caused your mouth to water then you haven’t yet stepped into Canberra’s new kid on the block and first-ever Greek bakery – Yiayia’s Bakery.

This new bakery in the Canberra suburb of Gungahlin is the brainchild of Greek father-and-son team, John and Theoklitos Anousas, and was made possible with the help of former Supabarn owner, Eric Koundouris.

Speaking to The Greek Herald, Theoklitos says opening the bakery was an easy decision as hospitality and cooking runs in the family.

“My father and my mother had a bakery for 28 years in Greece. They came to Australia in 2014 and my father started working for another bakery,” Theoklitos says.

“After four years, my father started John’s Family Kitchen. He used to supply Supabarn’s and IGA’s in Canberra and Sydney. Later, Eric gave us the opportunity to open a new shop and here we are.”

The rest, as they say, is history.

Theoklitos migrated to Australia with his wife in 2019 to join his father at Yiayia’s Bakery. Now, he spends most of his day baking traditional Greek sweets and cooking savoury food using his yiayia’s recipes.

“My yiayia came to Australia in 1959 and stayed for ten years. She returned five months ago for my wedding and to give us her recipes,” Theoklitos says, while stressing that’s where the bakery gets its name from.

“With my yiayia’s recipes we make everything with love.”

Theoklitos says he hopes to pass this love onto everyone who visits the bakery to try the food, whether that is Greek people or people from other local ethnic communities.

“We try to include food in our menu which is catered for other ethnicities as well, such as halal – no alcohol and pork,” Theoklitos says.

“We are bringing Greece to Canberra.”