Our Lady of Tinos: The second best art gallery in Europe 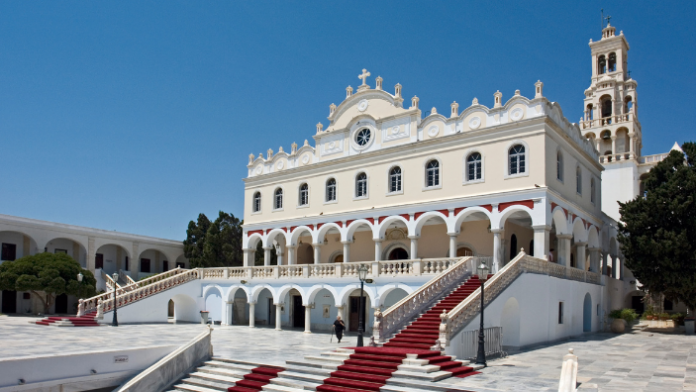 The Panagia Evangelistria Cathedral and Museum on the island of Tinos has been named the second-best free art gallery in Europe by a report from UK business training company The Knowledge Academy.

Our Lady of Tinos, as it is called is the most famous dedication to the Virgin Mary in Greece and is considered a pilgrimage for most Greek Orthodox Christians around the world.

Visitors who come, travel to the Cycladic Island to pray to the Virgin Mary, who is known as the “bringer of good news”.

The famous church is known to welcome many tourists each year and most of them do make the trip to see the miracle performing icon that is housed within the church.

What is less known to the public is that, within the cathedral are also several spaces containing exhibits. Artworks and artefacts donated to the church by worshippers.

The exhibitions include Icons and religious relics, contains works of ecclesiastical silver smithery and gold embroidery as well as the Museum of Tinian Artists.

Another gallery displays works by Greek and foreign painters along with a special exhibition dedicated to the Greek sculptor Antonios Sohos; and the Elli Mausoleum monument, dedicated to the crew of the battle cruiser ELLI, the first victims of World War II in Greece.