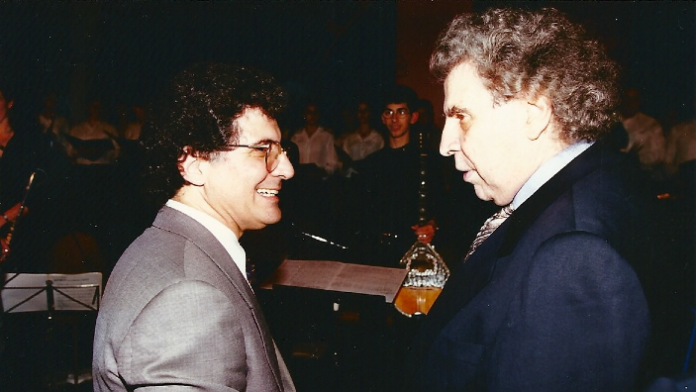 When news first emerged of the passing of legendary Greek composer, Mikis Theodorakis, The Greek Herald instantly thought to reach out to maestro, Themos Mexis, to play a small tribute concert in his honour.

Mr Mexis replied with a resounding yes and it’s no surprise as the Greek, who is also the Musical Director of the National Metropolitan Choir of Australia, has a strong connection to Theodorakis.

Here is a tribute to Theodorakis written by Mr Mexis right after his impromptu concert:

“Last night, I was very much humbled when The Greek Herald called me to ask if I could give a musical tribute to the great man. Impromptu as it was, I immediately replied with a resounding YES. It was an honour to have done so. Last night I wanted to pay my respects through his music. Here now, today, I want to share with you my own personal tribute to the great man, the musician, and what he has meant to me.

Mikis Theodorakis has passed and this has saddened us greatly but his legacy, both in his music and as a freedom fighter, lives on. Theodorakis has played a huge part in my own musical journey, from a very young age.

I was just 16 years old when I went to see the film, ZORBA, in a cinema in George St. When those first few chords were struck by the bouzoukia, I jumped out of my seat, yelling, whistling and applauding madly. That got the rest of the audience engaged, too. That was it: I was hooked; I became a passionate follower and later exponent of Theodorakis’ music, and of Greek music generally.

I lived in Greece, as a student and then as a professional, during the junta period; I was in the throng, as a student, when the tanks attacked and violated the Polytechnic, November 1973; I joined many other musicians in boites, playing his music, as our stand against the junta for imprisoning Theodorakis and banning his music.

Yes, Theodorakis has certainly been very much a part of our Greek psyche and identity, a great influence on my music and that of many other musicians. His music has and will continue to strike a chord with us all.

Today we grieve, but his songs will lift our spirits and remember the great man. ETERNAL BE HIS MEMORY.

The above photo is from a concert we gave in 1995, in the UN Year of Tolerance, in honour of Mikis Theodorakis, organised by the then-Federal Government and Minister Nick Bolkus, at the Refectory, University of Sydney. The program was made entirely up of Mikis Theodorakis compositions, arranged and conducted by myself, performed by the Mexis Orchestra and Choir, and solo vocalists Mary Yiakoulis and Sandy Constantopedos.