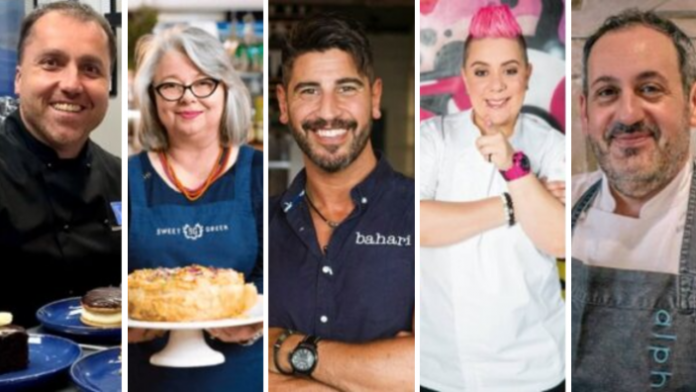 Today, on International Chefs Day, we celebrate remarkable chefs around the world and the many things they teach us about different cuisines and delicacies.

We’ve listed some of the top Greek Australian chefs who have made significant contributions to the Australian food landscape.

Considered Melbourne’s dessert hero, Kathy Tsaples is a passionate Greek chef with an inspiring success story. She grew up learning all about traditional Greek food and culture from her family.

After overcoming stage three breast cancer and releasing her first cookbook, Tsaples went on to open her ‘Sweet Greek’ store in Melbourne’s Prahan Markets and has since published a second cookbook.

Award winning pastry chef, Anna Polyviou, has made quite a name for herself in Australia’s dessert scene.

Polyviou began working at the Hotel Sofitel in Melbourne and has created a successful career in the hotel world. Polyviou is credited for Sydney Shangri La’s renowned culinary reputation, where she has created legendary, unique dessert experiences.

In 2014, Polyviou won the award for best dessert in Australia for her modern reimagination of the traditional carrot cake. Since then, Anna has published her first cookbook, ‘Sweet Street,’ and has featured as a guest judge on Masterchef Australia.

George Diakomichalis is an icon in the Greek Australian food landscape, creating a successful career for himself. Cooking and baking runs in the Diakomichalis family, as George was taught the art of patisserie from his great grandfather, grandfather and uncles.

His patisserie, ‘Kalymnos Pastries,’ located in Adelaide, is an ode to his home island, Kalymnos, where he completed his pastry chef training.

His family run store won the award for Best Patisserie in Australia in 2019, demonstrating the success of his business. Diakomichalis is becoming a household name, appearing in several cooking shows and also hosting his own series, ‘It’s All Greek to Me.’

Consitis’ first restaurant, ‘Cosmos,’ was the first Greek restaurant to be awarded a chefs hat, which he later achieved again with the opening of ‘Eleni’s’ and ‘Omega.’

The Greek Australian chef gained international recognition when he was invited to cook at the opening ceremony of the 2004 Olympic Games in Athens.

He is more recently known for his renowned work at Alpha Restaurant and Beta Bar in Sydney CBD, where he has showcased his innovative take on traditional Greek food. He has also published a cookbook, ‘New Greek Cuisine,’ and has featured on SBS’s Food Safari tours.

Phillip Vakos established his culinary career after competing in Masterchef Australia in 2010.

Vakos grew up with two Cretan grandmothers and was surrounded by Greek food and culture, inspiring his cooking dreams. He moved from Tasmania to Melbourne where he opened Bahari | The Hellenic Plate in Richmond, a meze-style Greek restaurant.

Since then, Vakos has made multiple TV appearances and has recently opened ‘The Gringlish Co,’ a catering company with his wife.