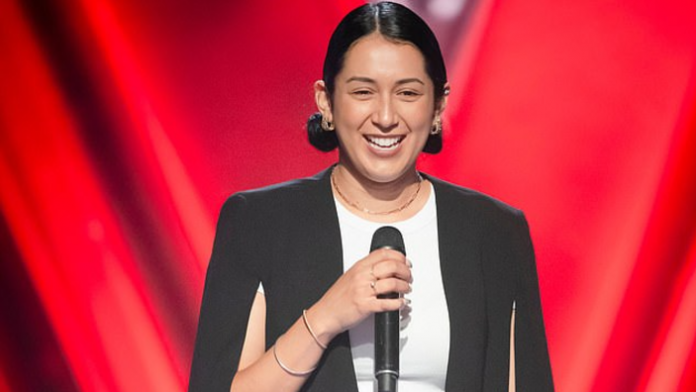 Halimah Kyrgios stepped out from her brother’s shadow on The Voice Australia last night, wowing the judges and crowd with her stunning rendition of Tina Arena’s classic song, Chains.

Ahead of her audition, the Canberra raised singer made it clear she wasn’t the only family member with big ambitions, but admitted she wasn’t as “out there” as her “little” brother, tennis star Nick Kyrgios.

“Having Nick in the limelight, it’s been a good and a bad thing. There is added pressure,” Halimah said in her pre-audition tape.

“Growing up we were always together, he was also singing and dancing, but then he just had a natural gift for tennis. I look to him a lot for inspiration, because he’s such a fighter — everyone knows he battles for everything. So even though he’s much younger than me I think if he can do it, then what’s stopping me?”

What followed was one of The Voice’s top performances of the night, with Halimah turning the chairs of all four judges – Guy Sebastian, Jessica Mauboy, Keith Urban and Rita Ora.

Ora quizzed the singer if she had a penchant for musical theatre and Halimah confirmed she has travelled around the world performing in musicals.

“You can tell because your stamina is really fantastic,” Ora remarked. “It felt so natural for you. I’m a fan of yours.”

Sebastian cheekily added: “You are seriously talented, as is your brother.”

Just before Halimah decided which coach she was going to choose to take her through the next round of the singing competition, Nick himself popped up on the video along with her mum and dad.

“I just flew back from Sydney so I missed it,” Nick laughed but agreed his older sister was always “amazing.”

In the end, Halimah couldn’t help but be a complete fan-girl and went with the international superstar Ora, who saw it as a huge honour to have the singer on her team.

“I did not expect her to pick me, I’m really flattered. That’s an Australian song, a classic and I’m glad she trusts me. There’s a lot we can do together,” Rita told the camera, before admitting there was a bit of flirting going on between herself and Nick.