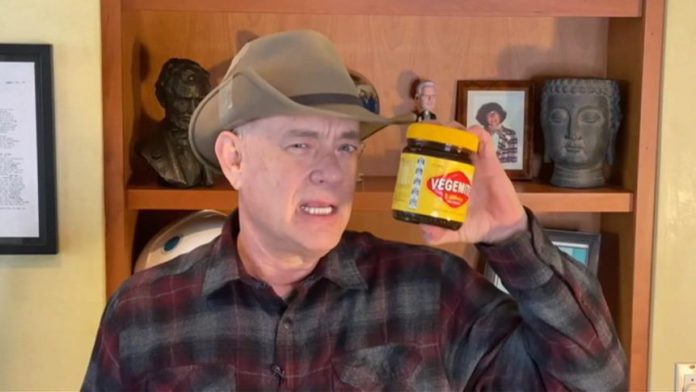 Honorary Greek citizen, Tom Hanks, was rolling out the Vegemite jokes and an Australian accent as host of Saturday Night Live’s (SNL) first “remote version” in more than 40 years.

The Academy Award winning actor, who is now back in the US after being treated for coronavirus in Australia, boldly attempted the Australian accent as he imitated nurses telling him his temperature in hospital.

“Now the folks in Australia are fantastic in every way, but they use celsius instead of fahrenheit when they take your temperature,” Hanks began.

The verdict is still out on whether he nailed the accent or not.

Hanks, who said he and his wife Rita Wilson are now “doing fine,” then threw to questions from ‘audience members’ which were actually just himself in costumes.

In one of them, Hanks pretended to be an Australian man who asked: “I’ve got a question for Tommy Tim Tam, what’s the right proper way to get a daily dose of your Vegemite?”

The camera cut back to Hanks in his hosting role as he brushed off the question with a laugh before saying, “enough of that.”

If you missed the Vegemite drama, Hanks tweeted a photo of toast with a thick layer of Vegemite in mid-March, prompting warnings that he’d gone too far with the salty spread.

In the last monologue, Hanks thanked healthcare, delivery, grocery and other frontline workers who have been working tirelessly amid the COVID-19 pandemic.

“This Saturday Night Live was a little different. For one thing, it’s been filmed entirely by the SNL cast who are currently quarantined in their homes,” Hanks said.

“We hope it gave you something to do for a little while.”

The inventive episode, born of necessity, gave people much more than that. It gave them the opportunity and excuse to turn off the news and laugh — even if just for a bit.