A taste of Greece in Sydney: the best new Greek restaurants in town 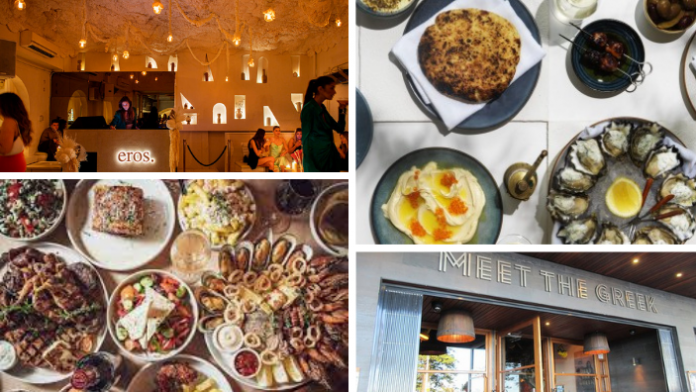 Where travel has been suspended for most of us for the last couple of years, the dream of a European summer and that beachside meal is something that has been so close yet so far away.

That feeling might be a lot closer than you think though, and without the price tag of a return ticket to Athens either, with the opening of various Mediterranean inspired restaurants across Sydney.

The Kings cross institution, The Bayswater Brasserie has been taken over by the Greek inspired lounge bar, ‘Eros’.

In this Mykonos-style lounge, Sydney residents can enjoy bottle service, traditional meze plates and even your own personal lamb on the spit!

Chef Murat Ekinci said that people are looking to go to places post pandemic that not only have great food, but also create a culinary experience.

“So many people haven’t travelled in the past two years, and we have a lot of clientele commenting that “it’s like stepping into Mykonos.” Chef Ekinci says.

Mediterranean vibes are also hitting Bondi Beach with the recent addition of Topikos Bar and Dining Room. The new restaurant is led by ex-Aria chef, Joel Bickford and is managed by Nick Ingall, who previously worked that The Apollo, in Potts Point.

The southern suburbs of Sydney will be host to upcoming Greek festivals in May where traditional music will play, and food stalls will feature the best of the Greek cuisine.

Brighton-Le-Sands is home to iconic restaurant ‘Meet the Greek’, who has recently relaunched after undertaking major modern renovations. The menu is full of village style food, with that warm home-cooked feel.

‘It’s all about cooking delicious food and lots of it’: Sophie Stokes take us ‘In Sofia’s Kitchen’