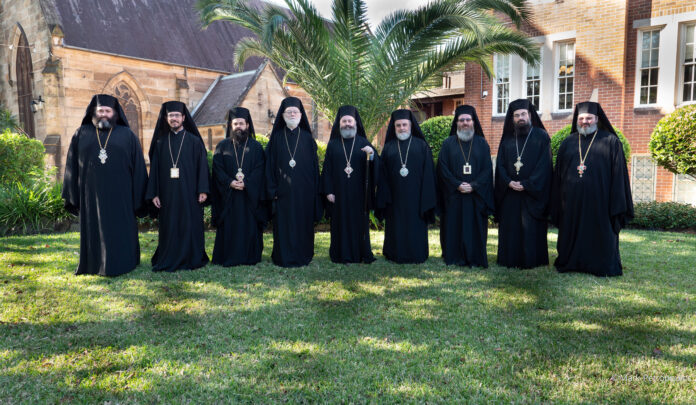 Note: Below is a formal statement by the Greek Orthodox Archdiocese of Australia. This is not a statement by The Greek Herald.

The 9th Meeting of Bishops and Archiepiscopal Vicars of Australia was held under the Presidency of His Eminence Archbishop Makarios of Australia in Sydney on 13 and 14 May 2021.

His Eminence Archbishop Makarios conveyed the Paschal greetings and blessings of His All-Holiness Ecumenical Patriarch Bartholomew to the holy Hierarchs and Vicars that were in attendance and updated them about current issues and initiatives of the local Church. All the items on the agenda were then considered and we announce to the clergy and Christ-loving plenitude of Australia, the following:

a) Global social crises, such as that of the recent Covid-19 pandemic, often lead to the appearance and outbreak of zealots and para-ecclesiastical voices that cause enormous spiritual damage to God’s people, disorienting them from the theological, ecclesiastical and scientific truth. In fact, it is sad that a portion of our flock does not obey the voice of the Church, the Patriarch’s, the Synod and its Bishops, but is easily swayed and blindly follows words of “enlightened” monks, elders, abbesses, visionaries, prophecy speakers etc. We urge the people of God not to be influenced by talk of impending dangers and should not attribute the global trial of the pandemic exclusively and only to the so-called new world order. The pandemic is a real fact and in no situation can it be allowed to become a tool for gaining benefit from communication, for increasing popularity stakes, for self-promotion and especially for confirmation of “spirituality” and “holiness”. This is why it was unanimously decided to send an Encyclical by His Eminence to the pious flock of Australia, which will authoritatively, theologically and scientifically inform the plenitude of our local Church about the pandemic and vaccination.

b) Along with the protest letters and petitions, which condemn the careless, irresponsible and ultimately malicious journalistic reports of the ABC news agency against our Archbishop Makarios, the Archdiocese and the Greek community in Australia, is added the protest of the Bishops of the Archdiocese of Australia that unequivocally condemns deceitful journalism and distortion not only for Hellenism and the Church, but for every organisation and for every person who resides in Australia. In an official statement, the body of Bishops asks ABC Management to retract the reports and to publicly apologise for the lies, slander and distortions they published about the Church, the Archbishop and the Greek community. Otherwise, it clarifies that the Archdiocese of Australia will turn to the Australian judicial system as well as other public and private organisations to restore the truth. At the same time, the gratitude by the local Church is publicly expressed to all the Organisations and bodies that strongly reacted by writing to the ABC, and whose members exceed 800,000.

e) The National Metropolitan Choir of Australia, which was established by His Eminence our Archbishop, is moving forward and will present its first official event on 26 November this year, at Sydney Town Hall to honour the completion of 30 years since the election of our Patriarch to the Patriarchal Throne. Unfortunately, due to the restrictive measures, the Metropolitan Choir will not be able to hold the event in Constantinople, and specifically in the Holy Church of St Irene, as had originally been planned for the anniversary of our Patriarch.

f) Following the voluntary resignation of Mr Konstantinos Kontis from the Consolidated Trust of the Holy Archdiocese of Australia, His Eminence has appointed Mr Theo Bakalakisas a member. Mr Bakalakis is an Archon of the Ecumenical Patriarchate and an elect member of the Greek community in Australia who works in Cairns.

g) The convening of the Clergy-Laity Congress is again postponed due to the restrictive measures imposed because of the pandemic in indoor venues. Determining factors in setting a new date for the meeting are the operation of the schools (the Clergy-Laity Congress will be held at St Spyridon College in Sydney) as well as the opening of the airports to non-Australian citizens, so that representatives of the Mother Church in Constantinople can attend this important event of our Holy Archdiocese.

h) His Eminence and the members of the Synaxis (Meeting)wish all the flock of the Holy Archdiocese of Australia to always have the joy of the Resurrection and the grace of the life-giving Tomb.