Winning entries from the Battle of Thermopylae Competition revealed 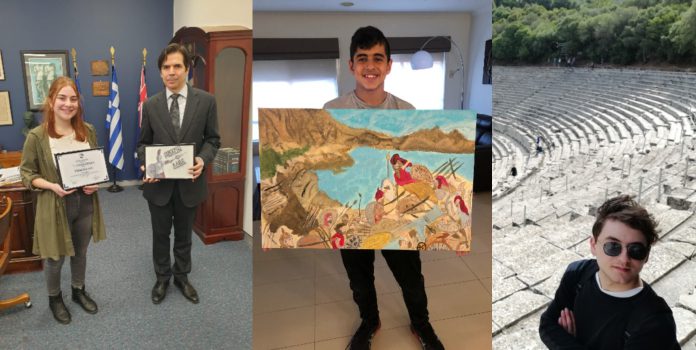 Last week we congratulated the winners for the Battle of Thermopylae 2500 Year Anniversary Competition. Today, we present their incredible creative works for you to read and admire.

The competition was launched to commemorate the 2500 year anniversary of the Battle of Thermopylae in 480 BC. It required people to submit any piece of writing or artwork, which was then selected by the team at The Greek Herald.

We would like to say a massive THANK YOU to everyone who submitted an entry for the competition. We were overwhelmed with responses, receiving works from schools and universities across the country.

The Greek Herald gave out a total of $1500 to our competition winners, with the winner of each category receiving $500.

Vaios Tioulis was the winner of our Year 7-9 category, submitting an amazing piece of artwork depicting the 300 Spartans at the Thermopylae pass, being led by the brave King Leonidas.

Vaios is currently in Year 8, studying at St. John’s Greek Orthodox college in Preston, Victoria. His incredible artwork beat out submissions from across the country, taking home the $500 prize.

17 Year-old Elaina Kazouris was the winner of our Year 10-12 category, presenting a piece of artwork of the legendary King Leonidas with the phrase “Molon Labe’ meaning “come and take”.

Elaina was presented a certificate award at the NSW Consulate by the Consul General in Sydney, Christos Karras, along with Greek Herald publishers Dimitra Skalkos and Elaine Kintis.

“Winning this competition is such a thrill for me – I’m so proud of myself for being able to show a piece of history with my art, and for having that art be shown to thousands of readers across Australia,” Elaina said.

With both of her grandfathers from Sparta, Elaina entered the competition to honour her family heritage.

“I’ve always felt inspired by the story of Leonidas and was very excited to have an opportunity to create meaningful work about the great battle,” Elaina added.

“Leonidas’ famous phrase ‘Molon Labe’ was the main inspiration for my artwork. I was moved by how powerful this short phrase was, and wanted to visually represent the strength of it.”

Franco Vieri took home the prize for the University category of the Battle of Thermopylae 2500 Year Anniversary Competition, submitting a touching piece of original poetry.

Titled ‘Molon Labe’, the poem tells the brave story of the 300 Spartans who saw their impending death, smiling down on their enemies saying ‘come and take’.

Franco entered the competition with an opportunity to write a piece about such an important part of Greek history.

“The Battle of Thermopylae is one of the most important events in Greek history and completely changed the world forever. Its impact can still be seen today, as it was one of the major events that led to a united Greece,” Franco said.

“I’m so excited that people will have an opportunity to read some of my work. I never thought I’d have this opportunity, especially when there were so many talented and amazing people who entered.”

An incredible and intricate analysis of the battle, Peter’s presentation is an accurate portrayal of the great sacrifice that was undertaken by the Spartan soldiers.

16-year-old Zack Stephens was the Runner-Up for the Battle of Thermopylae 2500 Year Anniversary Competition, submitting a fascinating piece of poetry.

Currently studying Ancient History in Year 11 at St Michael’s College, Zach saw the competition as an opportunity to develop and further his skills on the Battle of Thermopylae.

“​The Battle of Thermopylae is an example of persistence and how against all odds, victory is achievable,” Zack said.

18-year-old University student Jordan Mides was the runner-up for The Greek Herald’s Battle of Thermopylae competition, submitting an insightful poem on the brave actions of King Leonidas, who gave his own life to defend the pass into Greece.

“My piece was inspired both by the pride I have for the blood that flows through my veins and by my love of history. A love which I have pursued in my tertiary studies commencing this year,” Jordan says.

“The sacrifice of all of the men involved is truly incredible and the thought of what they endured drives me in times of adversity. In consequence of such, I wanted to share how I felt about the event with the wider community to attempt to scrape the surface of how inspirational this event was.”