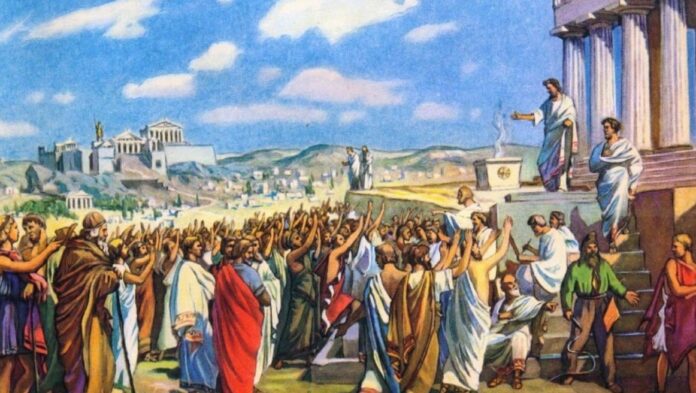 Paying zero taxes and owning slaves were just two facets of Athenian life in the 5th-4th century BC.

Below are the top seven facts about ancient Athenian democracy you might not know.

Women, slaves, and foreign residents were not allowed to vote

The sons of non-Athenian mothers and fathers were, too, not allowed to vote in elections. Women were restricted from actively engaging in politics. Women were not expected in the Agora, a central public meeting space for announcements and discussions, and were expected to keep to the household. Athenian men who served in the military were the only citizens afforded the right to vote. Cleisthenes of Athens, regarded as the founder of Athenian democracy, later helped extend the right to vote to all citizens.

Athens had the largest slave population in ancient Greece

80,000 – 100,000 slaves – an average of three or four per household, with the richest having as many as 50 – made up just close to half of Athens’s population. Slaves, who were captured as prisoners-of-war, were auctioned at a market and sold to be used domestically in private homes, factories, shops, and mines, and also as civil servants. Slaves did not have any human or civil rights and were often beaten, tortured, and raped by their owners. While slavery was considered to be natural and necessary, slaves were often freed or allowed to buy back their freedom.

Taxation in Athenian democracy was progressive. Taxes were based on a system of liturgy, or λειτουργία, meaning “public service”. This system meant the wealthiest of society paid for public expenses and funded festivals, banquets, and facilities. The Athenian rationale was that the rich should shoulder the expenses of the city. However, paying taxes wasn’t legally enforced but rather encouraged as a sense of duty and the wealthy ostentatiously boasted of prestige and honour when they did.

Sortition, a randomised ‘lottery’ process for electing public officials, was the hallmark of Athenian democratic process. Sortition appealed to the ancient Athenians as a fair way of maintaining an equal participation of the masses in power and preventing corruption. Ancient Athenians voted for only 10 per cent of their officials, selecting the rest – including magistrates, the Boule Council of 500, and the all-male juries in legal cases – by sortition. Sortition is still used in modern jury selection.

Athens went a while without a police force

Athens went without a police force until the 5th century BC. This police force consisted of a group of 300 Scythian slaves who guarded public meetings and performed arrests with bow and arrows in tow. While scholars agree that the force existed, speculation shrouds the authority and conception of the force.

The death penalty was exercised

Athenian law applied the death penalty with draconian severity. The death penalty could be imposed for theft of sacred property, prostitution, adultery, and homicide. Many other procedures from among the agones timetoi trials risked imposing the death penalty for theft, providing a false summons, and hubris – an ambiguous crime regarding violence committed for the sake of imposing humiliation or self-gratification. The guilty were executed by ingesting hemlock, a mixture based on plant extract from the poison hemlock.

The first democracy about 2,500 years ago

Athens was home to the first direct democracy in the world. Athenian democracy developed around the 5th century BC and served as one of the first forms of self-rule government in the world. Many Athenians from this era would mistake modern democracies today as oligarchy.