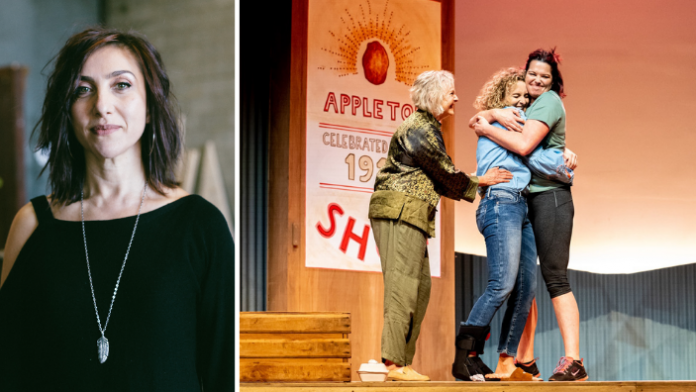 Inspired by real life events, the story is about five women who chew through questions about fairness, opportunity, gender equity and stand up for their principles.

Why is this production timely and how has Carapetis’ Greek and Cypriot background influenced the elements of this play and the complexity of the characters? Elena gives us the answers.

Q: What are the key messages of this production and how are they relevant to what is currently unfolding around the world?

A: The most obvious theme is around gender equality. The premise of the play is there is a potato race that happens every year and Penny Anderson, who grew up in Appleton, comes back as an adult to find out the men’s prize money is $1000 and the women’s is $200. Understandably, she calls out how unfair this is, and a big, hilarious culture war follows.

At the heart of the play is the notion of how we communicate with each other as a community and as a family, so that we are heard and so everybody gets the same chance to be respected.

I feel like at this time in history with so much happening on social media, we have almost lost the skill of nuanced and rigorous discourse. Melanie Tait has written a fantastic play because there are lots of different points of view about the world in it, but she doesn’t smash us over the head with one point of view.

She allows people to say, ‘well this is the reason why I feel this way’. And I wish the world was a little more like this.

Yes, the town of Appleton is flawed and filled with people who could do better, but at the end of the day they do strive to do better, and they lead with love. It’s been a joy to work on and although it traverses some important issues we need to look at as a community, as a country and as a society, it has a massive heart and I think it will bring the audience immense joy. It’s also incredibly funny.

I want the audience to feel like they’re visiting this fictional town of Appleton and having a little holiday, like they are a fly-on-the-wall watching life unfold in this vibrant community.

Q: In the play, Penny, the central character, wants to smash through a glass ceiling. Has your own migrant background and the support of strong women in your life influenced the elements of this play in any way?

A: The women who came before me in my family did not have the opportunities, education or agency I do. They were all incredibly smart, strong and resilient.

My great-grandmother raised four children on her own when her husband died – she was only 22. She became an entrepreneur of sorts in her village – she bought things in bulk and divided them into individual saleable items and earned a living.

She had no schooling, she had no safety net, she had no privilege. If she was around today, I’m sure she’d have been the CEO of a company. So of course, I feel a connection to all my yiayias, my aunties and my mother.

I always want to honour them in the work that I do – they sacrificed a great deal so I could have the freedoms I have now. I seek to make creative choices that centre the experience and voices of women, I want to lift the veil on how much women edit themselves, how they are programmed to play small and nice.

I try to make choices that open the hearts of people watching and make them appreciate all the quiet ways the women around them make their lives better. I strive to do all the things my ancestors never got to do and to say the things they never got to say.

Q: What is your message to the women out there who are taking action to win their own races?

A: To remember that your ancestors didn’t get you all the way here for you to play small.

And that it’s ok to get angry sometimes, in fact, it’s often the most appropriate response because it’s the part of you that loves you speaking up and telling you where your boundaries are.

Women and girls are spectacular – and we have the power to change the rules so they serve us all.

*The Appleton Ladies’ Potato Race is playing at Adelaide’s Royalty Theatre from June 4 to 19.