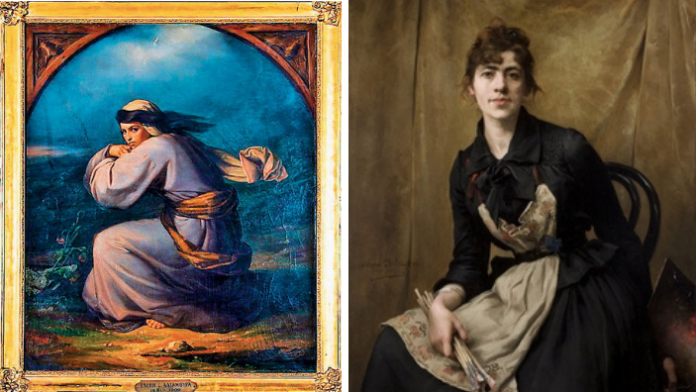 Eleni Boukoura-Altamoura was Greece’s first great female artist, whose work is considered extremely influential especially as she was the first woman to receive a formal art education at a time when this was off limits for women.

To mark the occasion of her death on this day in 1900, we take a look back at her incredible life.

Eleni was born on the island of Spetses in 1821 to Ioannis and Maria Boukouris. Her father was an Arvanite ship-owner who always had an interest in the arts, he was well known for opening one of the first theatres in Athens.

The Boukouris family moved to Athens in 1836, a few years after it had become the official capital of the newly founded state, and there Ioannis was able to send his daughters to the Hill School, which was erected following the aftermath of the revolution.

Eleni learned Italian, English and Ancient Greek and showed artistic promise from a very young age. She would make drawings of her school friends who would take turns posing for her between classes.

Career and Life in Italy:

Art schools did not accept women at the time, but Eleni was particularly determined and presented herself as a man under the name Chrysinis Boukouras.

During her studies, she fell in love with Francesco Saverio Altamura, an Italian painter who was of Greek origin from his mother’s side. The couple would have two children out of wedlock together, Sofia in 1851 and Ioannis in 1852.

She converted to Catholicism so that they could get married and in 1853, they wed.

In 1856, they had their third child together, Alessandro.

Her husband grew tired of Eleni’s nostalgia for her home country and 1856, he would abandon her for the English painter, Jane Benham Hay. They left for Paris taking with them the youngest child, Alessandro.

Eleni’s later life was full of tragedy with the loss of both her children to tuberculosis.

Her daughter Sofia was diagnosed with the disease in 1872 and died at the age of 18, leaving her mother inconsolable.

Her Son, Ioannis returned to Greece In 1876 and suffered from tuberculosis, ultimately passing away in 1878 in Spetses.

The loss of her children is believed to be the cause of her heartbreak and reason for her secluded life in Spetses until her death in 1900.

Very few of her works survive today, only a few paintings, drawings and busts are found mainly in private collections of her relatives’ descendants.