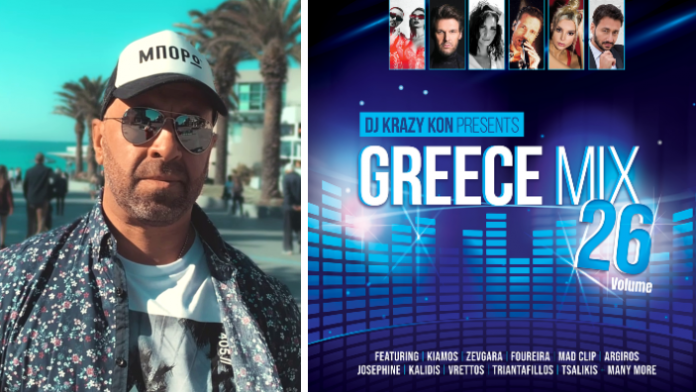 Most people will know the name Krazy Kon. He is an internationally acclaimed DJ, CD series producer and event promoter.

Many say he is an innovator, creator and legend who has been at the top of his industry for over 25 years and in this time has built a Greek entertainment empire.

DJ Krazy Kon has also just released the 26th volume in his iconic Greece Mix Series. To mark the occasion, we find out more about the DJ and his plans for the future.

Who is DJ Krazy Kon?

As a Dj, Krazy Kon started playing clubs and bars in Sydney in late 1994. Since 2004, he has gone onto play over 120 gigs across Australia with numerous shows in Melbourne, Adelaide, Darwin, Perth, Brisbane, Townsville, Gold Coast, Canberra and Hobart.

On the international stage, he has headlined 14 shows in America playing in Los Angeles, San Francisco, New York, Chicago, Boston and Tampa. He has also played four shows in Wellington, New Zealand.

As a producer and from his ideology, he has created the iconic GREEK MIX CD Series. It’s the biggest selling Greek CD series in Australian history. The series has broken all barriers with its availability in mainstream music stores such as Sanity, JB Hi Fi, Virgin, Myer and Big W.

Everyone has grown up listening to a DJ Krazy Kon CD and so far he has released an incredible 26 albums. His music is available all over the world on all the digital platforms with over 2 million streams on Spotify alone in 2021.

He has the recognition of making 4 ARIA Compilations Charts and 6 x #1 ITunes Dance Charts. This is a first for a Greek artist in Australia. He remains the only DJ in the world outside of Greece to have his own Greek CD series.

DJ Krazy Kon has returned with a bang and the 26th volume in his iconic Greece Mix Series.

The new CD hit #1 on the iTunes Dance chart in Australia four days after its release on November 12.

When The Greek Herald asks the DJ what inspires him to continue producing albums and showcasing Greek music, he says:

“I have dedicated my life and career to Greek music and entertainment industry. I am as Greek as they get! I grew up listening to Greek music from a young age and had a dream of creating my own CD series produced and manufactured in Australia. The CD series is now known around the world and educating people with what’s new in Greek music and that is a big motivator for me.”

Where can you buy the album?