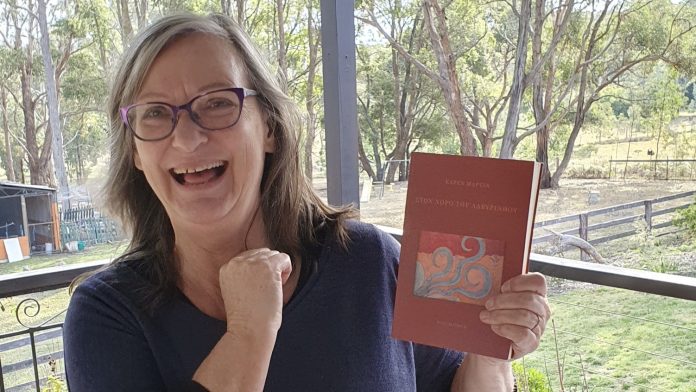 “I think sometimes to step forward, we need to have a look back.”

“As a theatre maker or writer, I have that honour, that privilege to do that.”

Karen Martin is an internationally recognised writer and theatre director based in Melbourne.

She has written narratives for the Women’s Circus and is behind shows such as The Women’s Jail Project.

She has contributed to several nonfiction books but is finally making her debut in the booming contemporary women’s fiction genre.

Dancing the Labyrinth follows Cressida, a survivor of family violence who finds inspiration in the Minoans, particularly priestess Pythia, who establishes a women’s community.

The book is described as a “celebration of women’s history, courage, friendship, and hope”.

“What Cressida does is really brave. It’s not easy looking at yourself sometimes when you have to go and face your Minotaur. I think that is a really scary thing in life,” Martin says.

Martin first heard about the Minoans during a three-month trip to Crete. Here, she began writing her book.

“Dancing the Labyrinth could never, ever have been written elsewhere but Crete,” she says.

“My husband and I walked over 2000 kilometres in the year we were there.”

“There must be a Greek word that the English does not suffice because… it’s so inspirational.”

The matriarchal culture of Europe’s most advanced civilisation of the Bronze Age is what caught Martin’s interest.

She says writing about the Minoans in their homeland inspired her creative process.

“Coming across the Minoans was the pot at the end of the rainbow. There is a matriarchal society,” Martin says, recalling that she’d never come across them during her studies in history.

“I’m interested in [women’s] stories because it roots us to our ancestry, our framework, who we are, and where we’ve come from.”

“I think that’s important when we look at [feminist] movements that are happening.”

“So, it doesn’t surprise me that their history formed the basis of the book.”