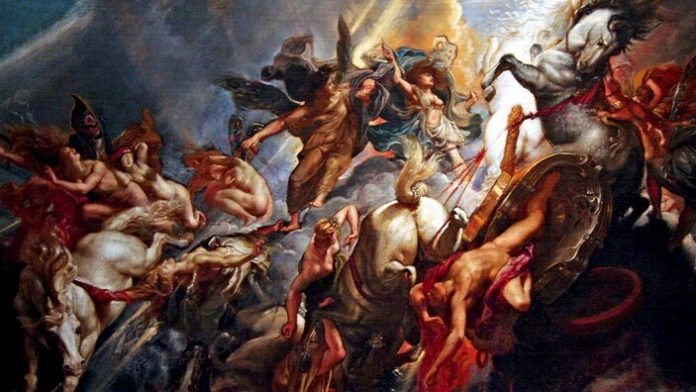 Ancient Greek storytellers were well known for creating myths and fables which usually included one man’s rise through a series of challenges to eventually become a legend who’s name would be sung throughout the land.

Whether these legends were based on reality or they were simply born from within the imagination of their creators, such as the epic poet Homer, we’ll never know. But some of these mythological beings have survived until today and their conquests have gone on to inspire many artists and creators, while a few of them even had Hollywood blockbuster film adaptations!

Written below are ten of the most commonly known figures from Greek mythology, in descending order. We’ll begin our list with our most famous heroes and save some of the hidden gems for the end.

Hercules/Herakles: Okay, who hasn’t heard of this name? Be it from the famous TV series starring Kevin Sorbo, or via the Pixar film in which he is brought to life thanks to the talents of Tate Donovan, Hercules is a figure that everyone has seen somewhere at least once in their life.

The son of the king of the twelve gods of ancient Greece Zeus and the mortal woman Alcmene, Hercules was half-man, half-god himself. Due to the irrational hatred of his step-mother Hera, Hercules was forced to go through a number of trials, more commonly referred to as “labours.”

The story of how he was able to overcome these twelve trials, including slaying and capturing a number of mythological beasts, are why Hercules is considered one of the greatest heroes to emerge from the Greek history books.

Achilleas/Achilles: When they ask Brad Pitt to personify you in the movie version of your own life, you know you must be a big deal! Achilles was one of the heroes that Homer brought to life in the first of his two epics, the Iliad.

Within the story, Achilles is portrayed as the greatest general of the Greek army which had been sent to Troy to help them take over the city and bring back Helen, the queen of Sparta, who had been seduced by the Trojan prince Paris.

After a series of events that resulted in the death of his best friend Patroklos, Achilles was so enraged that even the gods themselves could not stop him from hunting down the man responsible and general of the Trojan forces, Hector. Eventually he is said to have died by an arrow to the heel by Paris, which is how the famous phrase “Achilles’ heel” was born.

Odysseas: The protagonist who emerged from the pages of Homer’s second book, the Odyssey, Odysseas was also a warrior who had fought in the Trojan wars. After the end of the conflict, he decided to make his way home, yet he would discover that was no simple task.

Going through a number of ordeals including escaping from seductive sirens, fighting with titans and a trip to the afterlife, Odysseas finally made it back to his homeland of Ithaca, only to find his beloved Penelope surrounded by a number of suitors. After casually slaying them, they all lived happily ever after!

Perseus: Before Hercules came along, there was Perseus to take care of man-eating beasts! Son of Zeus and the mortal woman Danae, Perseus also possessed the qualities of a half-god, including the inhuman strength that gave him the potential to accomplish incredible feats.

Most notable among them was the slaying of the Gorgon Medusa, a mortal beast which had the ability to turn all men to stone with merely a glare, thanks to the weapons that were bestowed upon him by the gods.

Hector: A warrior who made a name for himself during the Trojan wars, in which he is said to have slayed over 31,000 men. He was the greatest soldier of Troy and the man who took down Patroklos, Achilles’ greatest friend.

Despite his courage and renowned fame, he eventually met his end at the hands of an enraged Achilles, who eventually caught up to him, butchering him and tying his corpse onto his carriage.

Theseus: The story of Theseus and the Minotaur is one of the most commonly known tales in the isle of Crete. After a battle between the Cretans and the Athenians saw the islanders emerge as the victors, the king of Crete, Minos, demanded a yearly sacrifice for the beast that lived within the labyrinth which was created by Daedalos, the half-man, half-bull Minotaur.

One of the men who volunteered to slay the creature was none other than the king of Athens Aegeus’ son, Theseus. Overcoming the beast thanks to clever strategy and some useful advice from Ariadne, king Minos’ daughter, Theseus returned to Athens to take over as king.

Prometheus: Although Prometheus, the son of Iapetus and Clymene was no mortal, his deeds speak for themselves. Belonging to the titan tribe, he was said to be the one responsible for bringing the humans into existence by using clay and for creating their first civilizations by gifting them with fire, which he had stolen from the gods.

Yet they did not stand idly by after this betrayal. Prometheus’ punishment would be severe as he was tied to a giant boulder with an eagle coming down and eating his entrails, which would grow back the next day, only for the bird to fly back and feed on him once again in an eternal, vicious cycle. He was eventually released by Hercules.

Orpheus: Orpheus was a renowned musician and poet. He rose to mythological status when he travelled to the underworld in an attempt to find his wife, Eurydice, who had been killed by a venomous snake bite to the heel.

As he mourned for her through the sounds of his harp, he was able to soften the heart of even the king of the underworld, Hades, who decided to allow Eurydice to go back to the world of the living as long as Orpheus did not turn around to look at her until after they had reached the surface. Filled with anticipation, the young harpist could not contain himself and lost his loved one for good.

Jason: Jason was the son of Aeson and rightful heir to the kingdom of Iolcos (today’s city of Volos). When he entered the town to claim his place on the throne from his step-uncle and usurper of the crown, Pelias, he was simply announced as “a man with one sandal.”

In an attempt to rid himself of him, Pelias sent him on a seemingly impossible quest to find the Golden Fleece, yet Jason readily took on this challenge. He assembled his crew and took to the seas in search of the treasure. Some of the most notable members to join Jason on his mission were: Hercules, Orpheus, Atalanta and the Dioskouroi brothers, Castor and Polydevkis.

Atalanta: Atalanta is one of the greatest heroines of Greek mythology. She is mostly known for being among Jason’s crew members on the hunt for the Golden Fleece, but also for slaying the Calydonian Boar.

However, she was also a bit of a tragic figure as she was said to have incurred the wrath of the goddess Aphrodite for choosing instead to worship Artemis, the goddess of the hunt. This made Aphrodite mad and she inflicted both Atalanta and Ippomenes with sexual desire.

They ended up making love in one of Zeus’ temples, a forbidden act which enraged the king of the gods who responded by morphing them both into lions. During the age of Greek mythology, it was said that two lions could never mate with each other, so this was the ideal punishment for the two, who would now remain forever apart.