On This Day: Greek rebetiko musician, Markos Vamvakaris, was born 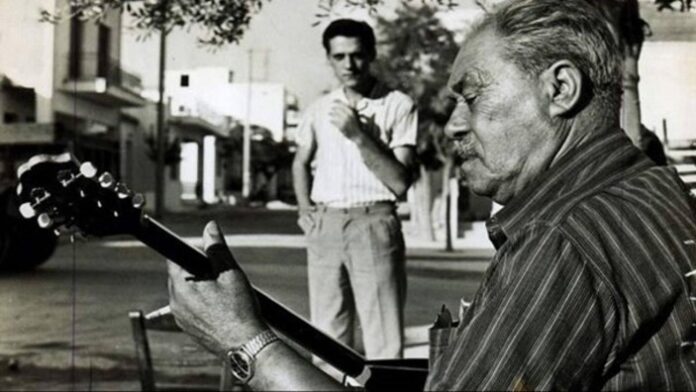 Markos Vamvakaris was a well known Greek “rebetiko” musician, who was born on May 10, 1905, in the settlement of Skali, in Ano Chora of Syros.

He came from a Catholic family and was the first of the six children of Domenikos and Elpida Vamvakaris. His family was very poor, but they were rich with a passion for music, an intergenerational talent. Markos’ father played the bagpipe, and his grandfather wrote songs.

His family belonged to the island’s large Roman Catholic community, the “Francosyrians,” a term derived from the colloquial Greek reference to West Europeans collectively as “the Franks.”

Markos had many jobs and had worked as a shoe polisher, a paperboy, and a worker in the yarn industry since he was a child. He left Syros at the age of 12 and moved to Piraeus, where he worked in various other jobs for the next several years.

At a later age, he decided to learn how to play the bouzouki and began writing his first songs. He watched a bouzouki player play one day and made a promise to himself that if he didn’t learn to play the instrument within six months, he would cut off his own hand with a cleaver (he was working in the public abattoirs at the time).

Markos studied the bouzouki intensively and became an inventive virtuoso player, he did all this without ever learning notes.

At the beginning of his career, he often performed in illegal hashish-smoking establishments known as tekés; later, he and his band, which included Giorgos Batis, Anestis Delias, and Stratos Pagioumtzis, performed in more legal clubs and popular taverns.

The band’s compositions became tremendously popular, and Markos recorded the majority of them. Among the rebetes community, he was known as “the Frank” (Fragos).

The composers, musicians, and singers of rebetiko were known as ‘rebetes,’ which means defiant, misled or disobedient, a Greek term similar to “Manghes,” someone who is anti-establishment.

One of the most famous songs Markos ever wrote was Fragosyriani in 1935, a classic love song that regained popularity twenty five years later with a cover  by singer Grigoris Bithikotsis.

Due to the anti-authoritarian style of Rebetiko, the music was banned during the censorship of the Metaxas government in 1937, Markos then had to change his playing style and adapt the lyrics.

Even so, Markos was so famous during the 30’s that 50,000 adoring fans attended his concerts, performed in Thessaloniki, near the White Tower.

In 1942, he married Evangelia and had three sons: Vasilis, Stelios, and Dominikos. His son Stelios followed in his father’s profession and also became a musician.

In the aftermath of WWII, Greece was still in turmoil despite being liberated from Nazi Germany’s occupation. The difficult times led to the style of music Markos played to no longer be popular or trendy. As well as his popularity being low, Markos also suffered from arthritis in his wrists, which affected his bouzouki playing. Due to his illness and the shift in music genre popularity, Markos became irrelevant and disappeared from the music scene.

On the 8th of February 1972 Markos passed away at age 66, he left behind many compositions and songs that are still adored today. There is even a museum exhibition in honour of him, in his home town of Syros.