May 20: Commemorating the Battle of Crete 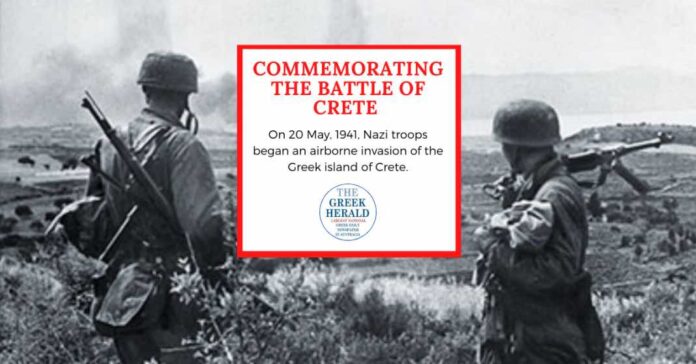 On May 20 every year, the Greek community commemorates one of the most dramatic battles of the Second World War – the Battle of Crete. Over 12 days in May 1941 a mixed force of Greek, Australian, British and New Zealand troops desperately tried to fight off a huge German airborne assault. The events that followed remain ingrained in the minds and hearts of many Greek people around the world today.

The invasion began on the morning of May 20. Shortly after 8 am, the men of Creforce (the designated name for the Allied troops on the island) saw gliders in the sky overhead, quickly followed by the rumbling of an approaching air armada. Hundreds of planes lumbered through the sky, dropping German paratroops into the area around Maleme and Canea, as well as in the airfields at Rethymno and Heraklion.

At Rethymno and Heraklion, Greek, Australian and British defenders kept the invaders off the airfields. But at Maleme, a mistaken withdrawal of a New Zealand battalion on the night of May 20 was exploited the next day by the Germans, who captured the airfield and were able to bring in the reinforcements they needed to defeat the allies.

After six days of hard fighting, parts of the Creforce pulled back to Sfakia on the south coast and from here, about 10,500 troops left the island over four nights. A separate evacuation at Heraklion rescued a further 6000 soldiers. The soldiers left behind, around 6500, formally surrendered to the Germans on June 1. The majority would spend the rest of the war in prisoner-of-war camps.

More than 1700 British and Commonwealth soldiers had been killed and 15,000 captured during the battle. From the Greek battalion, there were 426 casualties and 5225 prisoners of war.

Commemorating those who lost their lives:

On Sunday, May 17, a memorial service was held at the Cathedral of the Annunciation of Our Lady in Redfern, Sydney, to commemorate those heroes who lost their lives during the battle. The service can be watched here.

A wreath laying ceremony at the Shrine of Remembrance in Melbourne, will also be held for the Anzacs of the Battle of Crete on Sunday, May 24, at 11am. The wreath will be laid by the military guard of the monument on behalf of the Cretan Federation of Australia & New Zealand. The Greek flag will wave on the central masts. You can watch the ceremony live on the day here.

Further to this, the Cretan Youth of Australia & New Zealand have announced the Annual National Art Competition to commemorate the Battle of Crete. Participants are encouraged to research the Battle of Crete and portray a scene or an iconic image of the battle, including the ANZAC involvement. Artworks must be anonymous and can be sent to the email cretanyouthausnz@gmail.com before May 24 to be considered.

READ MORE: His Eminence Archbishop Makarios sends a message on the 79th anniversary of the Battle of Crete.