Greek Pontian Genocide Remembrance Day: 10 things you may not know 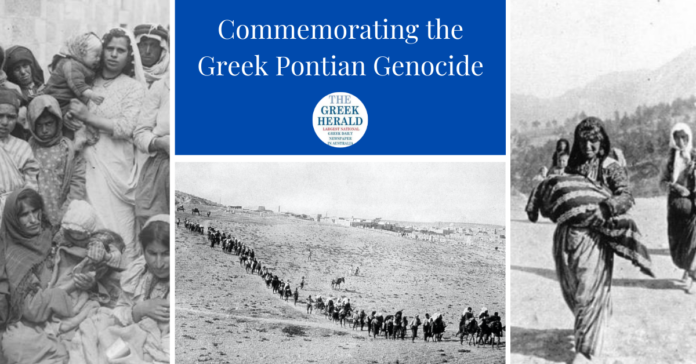 1. The toll: Pontic Greeks alone made up roughly 38% of the Greek Pontian genocide casualties. Around 350,000 people, including children, died between 1914 and late-1922. That’s a yearly average of just under 39,000 deaths between this period.

2. The Pontic Greeks were increasingly seen as a threat by the Ottoman Empire after the Balkan War and WWI. The Committee of Union and Progress (CUP), an ultranationalist movement of Young Turks, became a political party and began to run the Ottoman Empire with a vision of ‘total Turkification.’ They believed the Pontic Greeks were threatening the current Muslim-majority nation state and, therefore, commenced a genocide.

3. International recognition. The Greek Pontian Genocide was recognised by Greece in 1994, and is recognised in Cyprus, US, Sweden, Armenia, Netherlands, Germany, Austria, and the Czech Republic. As of May 2018, SA and NSW are the only two Australian states to recognise the Greek, Armenian and Assyrian Genocides. The Hellenic Council and the Greek Orthodox Community of Australia have lobbied for decades for the Australian Federal Parliament to recognise the genocide. Historians and scholars call for recognition of all genocides, agreeing that revising this period of history is damaging to the prosperity of the community today.

4. Pontic Greeks were not only murdered, hanged, punished, and diseased; they were expatriated and displaced to neighbouring countries, mostly “inhospitable hinterlands,” during the 9-year period. The Treaty of Lausanne of 1922-23, the international recognition of the Republic of Turkey as the successor state of the Ottoman Empire, facilitated the expatriation of “approximately 400,000 Greek-Ottomans” in Macedonia and Thrace, and notably Thessaloniki, Pella, Kilkis, and more. Pontic Greeks can now be found all over the world.

5. Ottoman-Greek men aged 21-45 were sent to concentration camps to work for the Empire. These men were deprived of food, sleep and their right to live.

6. The genocide helped Turkey reclaim Pontus. However, the Centre for Asia Minor Studies in Athens has identified as many as 1500 distinct Greek Orthodox settlements in the Pontus region, each with their own unique culture, traditions and way of life. Pontic Greeks in the remote region of Pontus, the Black Sea and Pontic Mountains in northeast Anatolia, are an ethnic Greek-Ottoman minority community. Their proximity to Turkey and their desolation made them easy targets during the genocide.

7. Remembering the Pontians that were forced to serve on the Ottoman side of WW1: The Ottoman government conscribed all Pontian men aged 18-50 to serve in WW1 with execution as the penalty for evasion.

8. What does the day mark? The 19th of May is the day Mustafa Kemal (or Kemal Ataturk), landed in Samsun on the Black Sea shores and intensified the brutal campaign of ethnic cleansing.

9. The Remembrance Day for the Pontic Genocide is May 19th. Two other remembrance days for the Greek Genocide are April 6 and September 14, to honour the victims of the eastern Thrace region and the broader Asia Minor, respectively.

10. At times, the Pontic Greeks took up arms and resisted the Ottoman Empire and began organising guerrilla forces as early as 1915. The idea was not only to escape genocide but to take revenge, as did the Armenians and Azerbaijani people in ‘Operation Nemesis’. Their resistance was aided by the Metropolitan of Amasya, Germanos Karavangelis, and other leading figures such as Vassilios Anthopoulos, Efkleidis Kourtidi, and Kotza Anastas.