Gikas Voulgaris: All you need to know about one of the first Greeks to arrive in Australia 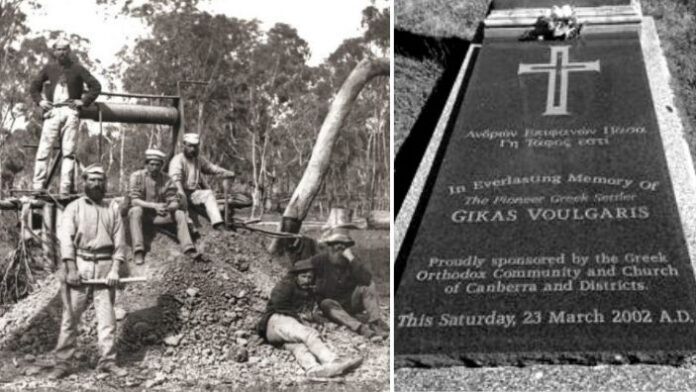 On August 27th, 1829, Gikas Voulgaris becomes one of the first Greek convicts to arrive in Australia 192 years ago.

Voulgaris is hailed as the founding father of the Australian-Hellenic community.

Gikas Voulgaris was born around 1809 in the Aegean port village of Hydra, Greece.

Voulgaris grew up to be a sailor-fighter in the Greek War of Independence in the 1820s.

The Greek War of Independence was in its sixth year when the captain of the ship Herakles, Antonios Manolis, led an attack on the British ship Alceste on the 29th of July 1827. The Alceste was en-route from Malta to Alexandria, Egypt, when it was intercepted by seven sailors from Hydra, Greece, including Manolis and Voulgaris. The other Greek sailors, including Damianos Ninis, Georgios Vasilakis, Georgios Laristos, Nikolaos Papandreas, and Konstantinos Strompolis, removed Alceste’s cargo in attempt to curtail its plans to supply the Ottomans with weapons.

The Royal Navy, travelling on the Gannet, apprehended the sailors near Crete and led them to face their trials in Malta, a former British colony.

The trial controversially sentenced the group to be exiled to 14-years of death row in Sydney, Australia, on charges of piracy.

Subsequently, Gikas, along with 192 other criminals, set sail on the Norfolk on the 20th of May 1829.

Gikas arrived at Port Jackson, Sydney, on the 27th of August 1829 to serve his sentence.

The seven sailors were employed in the shipyards of Sydney Harbour, the vineyards of Parramatta and Camden, and as construction workers on Elizabeth House in Vaucluse.

Greece was able to extend absolute pardons to the seven sailors in 1837, ahead of their sentence terms, once gaining independence.

Five of the sailors returned to Greece two years later. The other two, Manolis and Voulgaris, remained in Australia as free settlers.

Gikas married Irishwoman Mary Amelia Lyons in 1836 while living in Braidwood. Lyons was a 19-year-old girl who had migrated to Australia from County Cork, Ireland, on the Red Rover ship four years prior.

The pair constantly moved around in the Monaro district of southern-NSW to work as graziers.

They moved to Bukalong, where Voulgaris worked as a carrier on the Bibbenluke Station, in 1851.

Gikas became an Australian citizen and allegedly changed his name to Ginger/Zinger in 1861.

The pair moved to the Boco Creek, now part of Rockybah, which was just outside the Bibbenluke Boundary, in the late 1860s. Here, they built their house. Many remnants of Voulgaris’ stonework can still be seen, including the house foundations, stone wall and remains of a small church.

It is understood via Kalie Zervos’ Australia’s Hardworking Greeks (2017) that Sue, a puppeteer in The Rocks, Sydney, claims to be one of Gikas’ many descendants. The families of Bulgary, Macfarlane, McDonald, and Stewart, are also speculated to descend from Gikas Voulgaris.

Newspaper articles from 1900 suggest that Greeks arrived in Australia decades before Gikas and his six fellow compatriots. Furthermore, what’s known about Gikas’ life is sketchy. His name had many variations, including Jigger Bulgary, Jekier Bulgaire, Jaickar Bulgaria, and Tsikas Bolgkeris.

The Greek Orthodox Community of Canberra and District, under former President Costas Tsoulias, held a requiem mass at his restored grave on the 23rd of March 2002 and more recently, on the 6th of December 2020 a memorial service was also held by His Eminence Archbishop Makarios as part of the National Committee events for the 200yr anniversary of Hellenic Independence.