‘Fight for Faith and Country’: The revolutionary declaration of Alexandros Ypsilantis 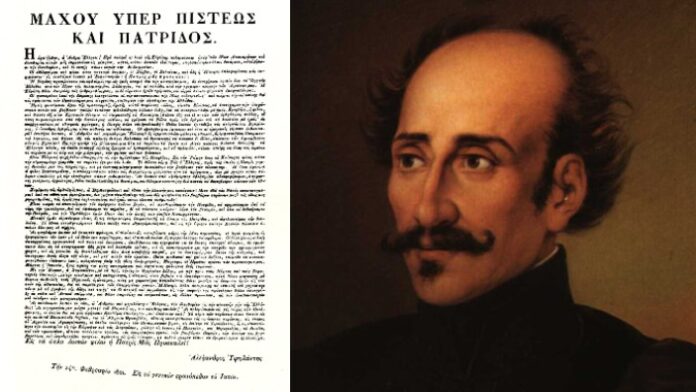 The revolutionary declaration issued by Alexandros Ypsilantis in Iasi, Moldavia on February 24, 1821, marked the beginning of the Greek Revolution.

The declaration calls on all Greeks to revolt and refers to the struggles waged by the European peoples to oust their tyrants.

READ MORE: On This Day: Declaration of the Greek Revolution 1821 made by Alexandros Ypsilantis.

Here is the full translation of the declaration, ‘Fight for Faith and Country’:

The time has come, O Hellenes! Our brothers and friends are everywhere ready. The Serbs, the Souliots and the whole of Epirus are armed and await us. Let us join together then with enthusiasm! Our Motherland is calling us!

Europe, its eyes fixed upon us, wonders at our inertia. So let all the mountains of Greece echo with the sound of our battle trumpet, and the valleys with the fearful clang of our weapons. Europe will admire our valor, while our tyrants, shaking and pale, will flee before us. The enlightened peoples of Europe are occupied with enjoying their prosperity and, filled with gratitude for the benefactions bestowed upon them by our forefathers, desire the liberation of Greece.

If we show ourselves worthy of our ancestral virtue and of the present century, we are hopeful of achieving our own defense and that many of these who are freedom-lovers will come to fight with us. Make the move, O friends, and you will see a mighty power defending our rights! You will see many among our enemies who, moved by our just cause, will turn their backs on the enemy and unite with us; let them declare themselves sincerely, and the Motherland will embrace them! Who, then, is hindering your manly arms? Our cowardly enemy is ailing and weak. Our generals are experienced, and all our fellow-countrymen are filled with enthusiasm! Unite, then, O brave and magnanimous Hellenes! Let national phalanxes be formed, let patriotic legions appear, and you will see those old giants of despotism falling by themselves before our triumphant banners. All the shores of the Ionian and Aegean seas will echo; the Greek ships, which in times of peace knew both how to trade and to fight, will sow horror and death, by fire and by sword, in all the harbors of the tyrant.

What Hellenic soul will be indifferent to the appeal of the Motherland? In Rome, a friend of Caesar’s, waving the bloody mantle of the tyrant, roused the people. What will you do, O Hellenes, to whom the Motherland, naked, shows her wounds, and with broken voice implores the help of her children? Divine Providence, O friends and fellow-countrymen, having taken pity on our misfortunes, has looked favorably upon our circumstances, so that with little effort we will enjoy all manner of happiness with freedom. If, therefore, out of culpable stupidity we are indifferent, the tyrant, becoming more savage, will multiply our sufferings, and we will become forever the most unfortunate of all nations.

Turn your eyes, O fellow-countrymen, and behold our wretched state! See here the violated churches! There, our children seized for the shameless hedonism of our barbarous tyrants! Our houses stripped bare, our fields plundered and ourselves wretched slaves!

It is time to throw off this insufferable yoke, to liberate the Motherland, to topple the crescent from the clouds, so as to raise the symbol by which we are always victorious, I mean the Cross, and thus avenge the Motherland and our Orthodox Faith for the impious scorn of the heathens.

Among ourselves, the noblest is he who bravely defends the rights of the Motherland and who works for it in a beneficial way. The nation assembled will elect its elders and to this highest parliament all our acts shall yield.

Let us move, then, with one common spirit. Let the wealthy give up part of their own fortune, let the holy shepherds encourage the people with their own example, and let the educated advise what is beneficial. Those fellow-countrymen serving as officers and politicians in foreign courts, giving thanks to the power each one serves, let them rush to the brilliant stage which has already opened up and let them contribute to the Motherland the debt they owe; and as brave men let us arm ourselves, without wasting time, with the unconquerable weapon of bravery, and I promise you in a short time victory, and, following that, everything that is good. What paid and flaccid slaves dare stand up against a people fighting for its independence? The heroic struggles of our forefathers are witnesses. Spain, the first and only one to rout the invincible phalanxes of the tyrant, is a witness.

With unity, O fellow citizens, with respect for our holy religion, with obedience to the laws and our generals, with boldness and steadfastness, our victory is certain and inevitable, and will crown with evergreen laurels our heroic struggles; will carve, with indelible characters, our names on the temple of immortality, for the example of future generations. The Motherland will reward her obedient and true children with the prizes of glory and honour, while those who disobey and turn a deaf ear to this present appeal she will disown as bastards and Asiatic seeds and will give over their names, as those of other traitors, to the anathema and curses of our descendants.

Let us then once again, O brave and magnanimous Hellenes, invite liberty to the classical land of Greece! Let us hold a battle between Marathon and Thermopylae! Let us fight on the tombs of our fathers, who, in order to keep us free, fought and died there! The blood of the tyrants is acceptable to the shades of Epameinondas the Theban and Thrasybulus the Athenian, who routed the thirty tyrants; to the shades of Harmodius and Aristogeiton, who crushed the yoke of Peisistratus; to that of Timoleon, who restored liberty in Corinth and Syracuse; and all the more so to those of Miltiades and Themistocles, of Leonidas and his three hundred men, who cut down innumerable times the countless armies of the barbarian Persians, whose most barbarous and cowardly descendants we stand poised today with very little effort to annihilate completely.

To arms, then, friends, the Motherland calls us!