GCM Seminar: Hydra and the Flame of the Revolution 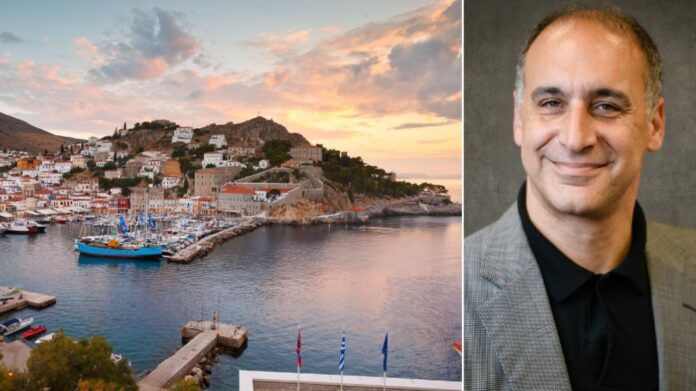 Alexander Billinis from the Clemson University (USA) will present an online lecture entitled Hydra and the Flame of the Revolution, on Thursday 3 June, at 7.00pm, at the Greek Centre, as part of the Greek History and Culture Seminars, offered by the Greek Community of Melbourne.

The island of Hydra, a largely barren (yet strikingly beautiful) stone massif rising from the Saronic Gulf, became one of the most important centers of the Greek War of Independence. Sparsely inhabited in 1600, waves of refugees sought solace on the rock, and the need for sustenance and agency drove the Hydriots—like Greeks over the millennia—to the sea.

From the first unwieldy ship in 1657, Hydriots became a center of shipbuilding and their carrying trade spread from the Aegean to the larger Black Sea and Mediterranean basins.

They piloted the politics of the era with the same skill as their ships, flying the Russian flag when needed, and sending their sons to the Ottoman Navy in exchange for internal autonomy. They invested in technocracy, founding the first merchant marine academy—in the world—in 1749. By 1820, the island had over 20,000 people and was one of the richest locales in the Mediterranean, but when the Revolution began, Hydriots—particularly and crucially their middle classes—could not turn their back on the cause.

Once the die was cast, Hydra went all in, with their ships and fortunes. Hydriot ships were converted merchantmen with fewer cannon than their opponents’ warships, but their sailors were among the best in the world and knew Ottoman tactics. Older ships were repurposed as fireships, which, piloted by brave crews, often turned the tide in battle against the huge Ottoman frigates. The navy both cleared the Turks from much of the Aegean, but just as importantly, prevented Turkish forces from landing at will in the Peloponnesus and other key revolutionary sites. Hydra, along with her fellow “Nautical Islands” of Spetses and Psara, played a starring role in securing Greece’s liberty.

The story of Hydra’s rise is perhaps even more interesting than her heroic role as the naval and financial center of the Greek War of Independence, for without the decades of hard work and skilful navigation of the waves, literal and political, there would likely have been no 1821 to celebrate. Hydra is a triumph of Greek Agency—personal, economic, and political.

Alexander Billinis is an instructor at Clemson University, in Clemson, South Carolina, USA, where he is also a graduate student in the History Department. He teaches Science and Technology in Society at the University Undergraduate College as well as selected Seminars in the Honors College, where he also runs the prestigious Dixon Fellows Program. He also has lectured on Greek, Balkan, and Byzantine subjects in Greece, Serbia, and throughout the United States.

He has been a member of the East Mediterranean Business Culture Alliance (EMBCA) Hellenic American Revolution of 1821 Bicentennial Committee, which has hosted numerous virtual and in person panels on issues related to Greece’s Bicentennial.