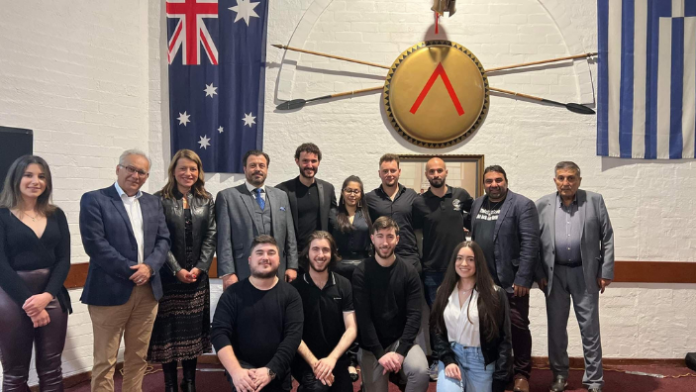 Brought to Italy from the Greeks who colonised the area 2,800 years ago, the Greko language has survived but is diminishing with each passing generation.

International filmmaker/architect, Basil Genimahaliotis, and filmmaker/author, Billy Cotsis, documented the language as it stands today and cast the spotlight on the people who continue to speak it. The documentary, titled “Magna Graecia: The Greko of Calabria”, was presented at the packed Pallaconian Brotherhood of Melbourne and Victoria “Leonidas”.

The struggles of the Greko speakers to preserve their language and identity, hit a chord with the Greek Australians present. They, too, have seen the Greek language dilute as it is passed from one generation to the next.

The Greek Consul of Melbourne, Emmanuel Kakavelakis, said that Greko is something of a “tourist attraction” these days which holds a warning for the Greek language in the diaspora. “What awaits our community?” he wondered.

In the documentary, Calabrian Greko speaker Eleonora Petrulli says, “We actually want it to be a language that lives, that is spoken in the valley of Calabria.”

An elderly man laments that his village “each passing day, is left even more alone”.

A small ray of hope comes from the happy voices of Calabrian children singing in the language of their heritage, a Greko song. They get koala souvenirs from the film crew for their efforts.

It hasn’t been easy to keep the Greko language alive. “Under Benito Mussolini’s regime anyone who spoke Greko risked the death penalty,” Mr Kakavelakis said, adding that the forced closure of churches was another nail on the coffin of a language that was almost extinct by the end of Mussolini’s dictatorship.

Despite becoming almost extinct, the mid-20th century saw around 5,000 or so fluent speakers of the language.

“It is fascinating to see how these people cannot forget their roots,” Mr Kakavelakis said.

Greek Australians may be different to the people of Calabria, however they can learn from their experience.

Following the screening, Ms Mikakos asked about the Greko villages: “What are the resources they need? How can we assist?”

Funds were gathered in jars from those present in the hope that they could help finance teachers and learning resources at a Greko cultural organisation in Southern Italy.

Mr Cotsis told The Greek Herald that it is important to keep the language alive. “I need as many people to learn about these ancient living breathing statues, our gateway to ancient and Byzantine past,” he said. “Everyone out there has a role to play to save their language and help maintain this unbroken link to ancient Hellenes.”

During the Q&A following the film, a number of questions were asked and suggestions were made. Delphi Bank National Engagement Manager Paul Orfanos asked, “Has the Ministry of Culture for Greece got its people involved, because if Greko were a bird the Ministry of Nature would put it on the endangered list and give it every assistance?”

Dr John Martino, academic, author and former military officer of Greek and Italian heritage, prologued the event. He focused on his mixed heritage in his opening and spoke of his own experiences from the prism of this.

Regardless of background, Mr Kakavelakis said: “Hellenism for us is a unifying force and not a culture that separates. Hellenism is ecumenical and is like a tree that grows and grows.”

Of course, a tree has many branches, some stumped while others stretch onwards and upwards. We can only hope that the branch for the Greko language will strengthen and survive.

On the night, the President of the Pallaconian Brotherhood of Melbourne and Victoria “Leonidas,” Miltiadis Paikopoulos, also thanked Mr Cotsis for showcasing his passion for the Greko community through his documentary, and recognised the hard work of his Youth Committee for organising the world premiere.

“I’m just so happy with how it went, this is topic so close to my heart, these are some of the unfortunately forgotten Greeks, these are the ακρίτες of Hellenism,” Mr Paikopoulos told The Greek Herald.

“It’s an event I was so pleased to organise with the filmmakers and my committee, it was very meaningful, and I think everyone in attendance could feel the pathos.”