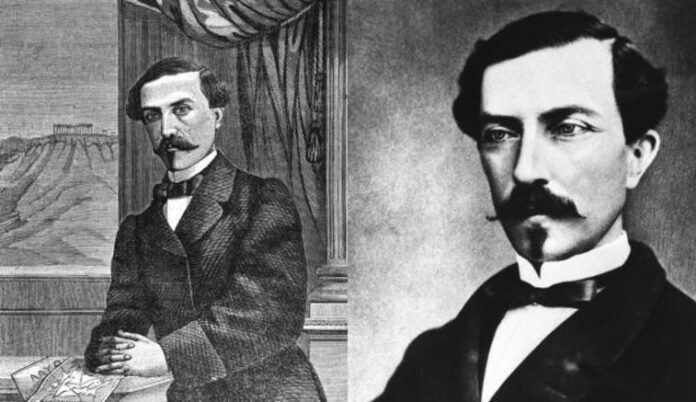 A lawyer, journalist and politician, Epameinondas Deligeorgis was one of the most respected political officials in modern Greek history, serving seven times as Prime Minister of Greece from 1865 to 1878.

Epamineondas Deligeorgis was born in Tripoli on January 10, 1829. His father Mitros Deligeorgis (1775-1860), originally from Messolonghi, was an important 1821 fighter and leader of the Gendarmerie after his release.

Epameinondas studied law at the University of Athens and in 1850 was awarded a doctorate from the Law School.

As a lawyer, he was distinguished for his torrent of speech and eloquence, advantages that followed him in his parliamentary life. This high standard of literacy aided him from 1851 to the middle of 1852, where he was the editor-in-chief of the Ethniki newspaper.

In October 1859 he was elected for the first time as a deputy of the province of Messolonghi.

Having difficult relationships with King Otto, he failed to be re-elected as Messolonghi MP, sparking his displeasure with the Greek royal family. When the uprising in 1862 against Otto prevailed, Epameinondas drafted the revolutionary proclamation, which is today known as the “Resolution of the Nation”.

The Prime Minister’s terms were unpredictable mostly because of the foreign relations at the time. During his second term, the Russo-Turkish War broke out to which the PM maintained a neutral stance, angering the Greek people and forcing him to resign.

Epamineondas Deligeorgis died in Athens on May 14, 1879, at the age of 50. He was married to Xanthi, daughter of politician Lazaros Giourdis, with whom he had seven children.

His death was considered a national tragedy and was sincerely mourned by his political opponents. He was regarded as a man of liberal principles, a useful, virtuous and powerful politician, but also a great orator.