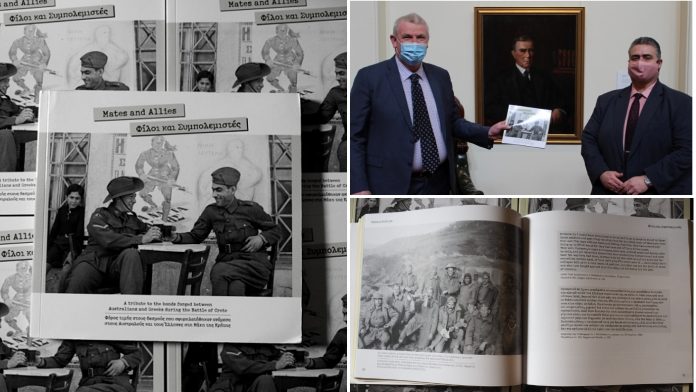 The current COVID pandemic has impacted on our lives and our access to public activities. Many no doubt had planned to be Greece for this year’s 80th anniversary of the Greek campaign of 1941.

Despite these restrictions the Australian Embassy in Greece was able to organize and take part in a number of innovative events to commemorate the Greek campaign anniversary, and particularly Australia’s role in it. This included not only attendance at various commemorative events on Crete but also an innovative visual display in Athens of photographs from Australian and other archives of the campaign.

During the commemorations the Australian Embassy produced and released a new and impressive nearly 200 page publication, entitled “Mates and Allies.” It showcases many of the photographs and images of other important documentation from the campaign including the battle of Crete, sourced from Australian and Greek archives. Also included are text extracts from firsthand accounts by diggers and nurses of their campaign experiences. Photos show images from Athens to northern Greece, to Argos, Nafplio and Kalamata, to Crete and the evacuation. Importantly, the whole publication is produced in both the English and Greek languages.

The significance of the publication is shown by the inclusion of prefaces by the Australian Prime Minister Scott Morrison MP, the Prime minister of the Hellenic Republic Kyriakos Mitsotakis, the then Australian Minister for Veterans Affairs Darren Chester MP and the Regional Governor of Crete Stavros Arnaoutakis.

Historian Jim Claven was enlisted to support the publication by assisting in the selection of photographs and in providing an authoritative historical overview of the Greek campaign as a way of introducing the photographs and placing them in context, as well as suggestions for further reading. Readers of Jim’s Lemnos & Gallipoli Revealed and his many historical articles will know that his contribution to this new publication is of a similar high standard.

Jim’s overview provides an excellent introduction to the campaign – from the arrival of Australian and other Allied forces in Athens and the popular welcome they received, their movement up to the north of Greece to face the coming enemy invasion, the various battles in the north (from Vevi and Pinieos George to Servia), the fighting retreat towards the evacuation beaches across southern Greece and the fierce engagements fought on the way (such as at Brallos Pass, Corinth Canal and Kalamata), the evacuation to Crete and the subsequent defence of the island (such as at Maleme, 42nd Street, Rethymno and Heraklion) to its final evacuation. He touches on the often forgotten role of Australia’s nurses and Royal Australian Navy in the campaign as well as the service and fate of the only Australian soldier of Hellenic descent to die in the campaign, Private James Zampelis.

Importantly Jim has also chosen to highlight some of the escape and evasion stories from the campaign, drawing on his research into the stories of Horsham’s Private Syd Grant, Frankston’s Lance Corporal Skip Welsh and indigenous digger Sergeant Reg Saunders, recalling the depth of gratitude felt by these young Australians to the many ordinary Greek civilians who helped them survive and escape capture. This is sentiment is reflected in the words of Skip Welsh and selected by Jim to illustrate this feeling:

“The Greeks helped us to escape from the country. They guided us over the mountains, from village to village, each village supplying a guide to the next one. They helped us with food, Greek Orthodox priests gave us shelter and food in their churches and the police warned us of any approaching Germans on the route. … The Greeks were extremely kind to us. It amazed me that people who have everything to lose and nothing to gain could open their arms to us”

In recounting the story of the campaign, the book also honours the service of diggers like these who fought across Greece. Jim says that the descendants of both Syd Grant and Reg Saunders are glad that these stories have been part of the re-telling of the campaign. Throughout the overview Jim refers to many of the photographs published in the book, weaving their images into his narrative, drawing your attention to their illustration of aspects of the campaign.

Mr Claven says that it was an honour to be approached to contribute to this important publication and congratulated the Australian Embassy on taking on such an important task:

“I have always found the individual stories connecting Australia and Greece through the Greek campaign fascinating. They connect people and communities to this period of intensity, where ordinary people – whether as soldiers or civilians – felt called upon to do extraordinary things in the cause of freedom and the defeat of fascism. This book demonstrates that bond vividly”, Mr Claven said.

“As time passes and the distance from the Greek campaign grows, it is through major publications like these that awareness of the Australian connection to Greece through the 1941 campaign is kept alive. As they say, a picture can tell a thousand words and the photographs published in this collection demonstrate the bonds of friendship between our two peoples – as the title of the book says, we are “Mates and Allies.”

The publication was made available by the Embassy in Greece during the recent commemorative events on Crete and in Athens. Mr Claven is hopefully that the book may be made available to a wider audience in the near future.