‘An important story to be told’: Why Helena Kidd turned her mother’s diary into a memoir 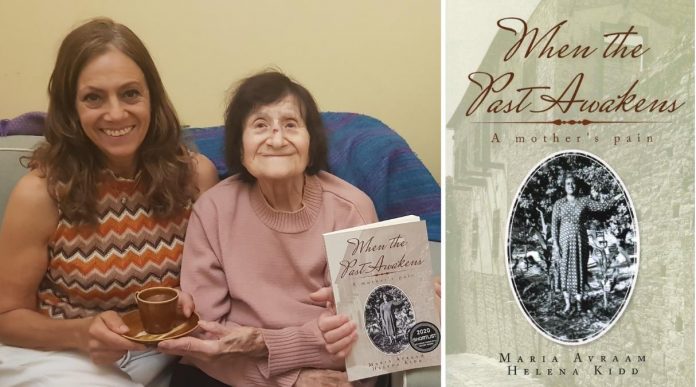 Nearly ten years ago Helena Kidd, a first generation Australian of Greek Cypriot heritage, came across her mother’s, Maria Avraam’s, Greek handwritten diary and had it translated to English for the family.

“I found my mother’s A4 pages of Greek writing and because I can’t read Greek, I asked her what it was and she said it was her diary. She said it was her heartache and that she just had to put it into writing.

“And she did that writing when she was 64 after she moved out from a house we have lived in, in Richmond that belonged to my uncle and finally bought her own home,” Ms Kidd tells The Greek Herald.

Some years later, she felt the need to share her mother’s story with a wider audience and this led her to rewrite sections, edit and improve upon the story, “When the Past Awakens: A Mother’s Pain”.

“I self-published the book with my mum’s permission. She was ok to reveal to the world what’s in the book and there is a lot of mental and physical abuse by my father -a story that many Greek women take with them to their grave,” Ms Kidd said.

“It’s a real and brutally honest account of her life and thoughts, straight from the heart. Her domineering mother was a constant battle of the mind and spirit.”

Arriving in Australia from her village in Cyprus presented even more challenges especially when she found herself alone, a deserted wife, with three small children to raise.

However, Maria proved to be a survivor who triumphed against the odds.

“It’s a very important story to be told with so much abuse currently going on in our communities,” said Ms Kidd.

When the book was published Ms Avraam was in her 90s and knew she wouldn’t live much longer.

“She knew she was ready to go and she didn’t care what people would think and couldn’t hide these secrets anymore.”

Until she read the translated notes of her mother Ms Kidd had no idea what her mother had been through but she says she feels lucky that her mother got to see the book before she passed away late last year aged 98.

“She got to see the book and an award. She couldn’t believe that people read her story and what she went through. And it’s not about misery. It is a beautiful story.

In the second part of the book, Helena shares further insight and creates a bigger picture for the reader of the family’s life in 1960s and 1970s.

“Today, women are still the silent victims just as Maria was. It still happens, so her story is very relatable in today’s society and other cultures,” Ms Kidd says.

“Despite the difficulties my mother gave us the best life. She instilled to us -my siblings and me- her power and strength. This book is not only about my mother but also other mothers of her generation. For the mothers that never give up but keep going despite the adversities.”

*You can purchase the book “When the Past Awakens: A Mother’s Pain” via the Royal Historical Society of Victoria