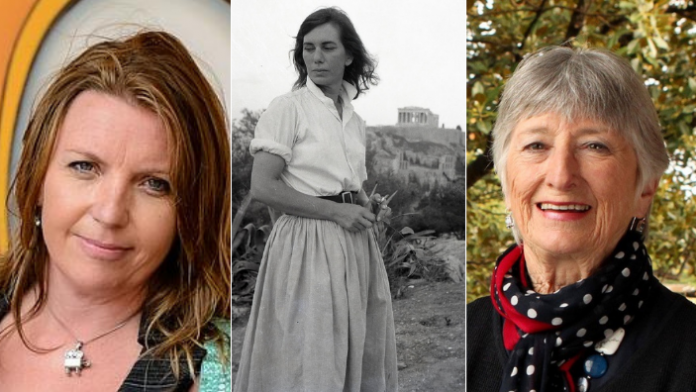 The Greek Australian community may best remember Charmian Clift as an advocate for Greek democracy in the 1960s, but that was one aspect of the charismatic columnist.

Clift and her husband George Johnston are notorious for their escapades in the Greek island of Hydra, then home to a colony of expatriate creatives.

Filmmakers Rachel Lane, of Faithfully Me (2020), and Sue Milliken, of Ladies in Black (2018), are making Clift’s essays, published in the mid-to-late 60s, the focus of a new documentary.

They are pitching ‘Life Burns High’ as a feature film that showcases Clift as one of the greatest Australian writers of the 20th century and a trailblazer of the travel writing genre.

“I read [The Life and Myth of Charmian Clift by Nadia Wheatley] and thought, ‘This is such an amazing story,” Lane tells the Greek Herald.

“It has all the hallmarks you need for a movie.”

“The timing is right to do a documentary,” Milliken adds.

It didn’t take much to convince veteran film producer Milliken, who knew Clift and Johnston personally as colleagues, to join the project.

“I was mesmerised by their charisma and artistic power. It was one of the most memorable experiences of my life, knowing them,” Milliken tells the Greek Herald.

“So when Rachel got in touch and said, ‘Would you like to work with me on the documentary?,’ I didn’t even hesitate.”

Clift and Johnston lived in Hydra for over a decade and were responsible for the island’s transformation as an artist’s colony in the 1950s.

“Hydra provided their creative [inaudible] where they could write during the day and then do what they needed to do at night for their family. At the time, it was a very cheap way of living. So that was the attraction of Hydra,” Lane says.

“It attracted the creative bohemian lifestyle.”

“Charmian kicked off a whole genre of writing which she drew from her experience on Hydra.”

“She was so passionate about the Greek people and the cause. She never stopped loving Greece and her experience there,” Milliken adds.

Clift was involved with the Committee for the Restoration of Democracy in Greece.

“…Charmian was very supportive and very vocal for the democracy in Greece. When she came back to Australia, she was a big part of [the committee],” Lane says.

Clift returned to Australia in 1964 during her later years.

“When you come back to suburban, early ‘60s Australia, that would have seem a bit mundane, really,” Lane says.

“As Charmian landed back, she was able to see [Australia’s ultra conservatives] with the clarity that people who live here were writing these couldn’t see. That vision was what made her essays and the writing that she did about Australia so remarkable,” Milliken adds.

“It’s such an important Australian story. It says so much about Australia, expatriates, Greece, artistic endeavour and it’s a totally worthwhile story.”

Lane and Milliken have raised over $56 thousand through the Documentary Australia Foundation. Visit this link to make a donation.