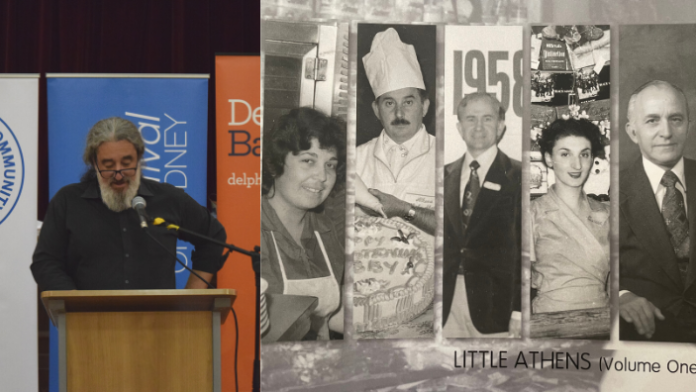 Vasilas’ book is a culmination of years of historical research into Marrickville’s once thriving Greek population, looking at the longevity and success of Greek businessmen and women as well as their contribution to local, national and international markets.

Councillor Drury, the first speaker of the evening, expressed his joyfulness on behalf of Mayor Darcy Byrne for Vasilis dedication to ensuring the Greek legacy of Marrickville lives on.

“While the Inner-West has possibly become a little less Greek… what this book shows is that Australians of Greek background can continue to call Marrickville their home,” Cr Drury said, adding that the Inner West Council has further delivered on this commitment through their renaming of the precinct as ‘Little Athens’.

Chris Skoufis, of Olympia Refrigeration, delivered an emotional speech in thanking Vasili for honouring the hard work of not only himself, but all all Greek migrants who contributed to the development of Marrickville and Sydney.

Harry Souris, owner of the famous M and J Chickens, drew applause when he announced that Marrickville would forever be the home of the iconic poultry store.

“Throughout the years, we’ve built up really strong friendships in the area… as our business has grown and developed over the years so has Marrickville,” Souris said.

Professor Vrasidas Karalis, Sir Nicholas Laurantus Professor of Modern Greek at the University of Sydney, echoed the thanks of Stavros Kritikos for Chris Skoufis’ generation of Greek migrants, who brought with them the hard-working ethos from their homeland.

“You are the heroes… You dedicated yourself to your professions and finally all the community can celebrate your life,” Professor Karalis said.

“I think this book is not simply a recording of archaeological history, it is a history of the ordinary people… of the suffering hard-working people”.

Author of the book, Vasilis Vasilas, concluded the evening by speaking about the history of Marrickville’s Greek population and the legacy they retain.

“Marrickville shatters every stereotype of a what Greeks did in Australia,” Vasilas said.

“Everything from yeeros to feta cheese… Marrickville’s Greeks did it and they’re still doing it now.”

Vasilis added that it doesn’t matter who has the better souvlaki store, or who sold the best chicken, but the story behind each of those businesses is one of hard work and perseverance.

To those who were unable to make the launch, the book is available to purchase at Danas Deli Cafe, Marrickville.