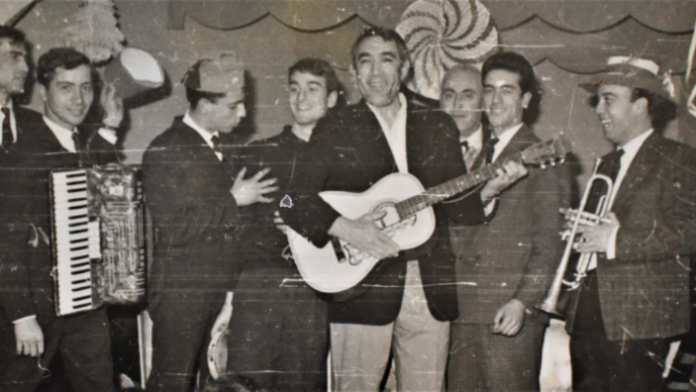 With thousands of Greek migrants arriving in Sydney every year during the 1960s, they yearned for entertainment and leisure that reminded them of their homeland.

Working as factory fodder, and other hard, laborious jobs, during the week, they just wanted social outlets to release their frustrations and worries. Bouzoukia and tavernas were social hubs where Greek migrants could speak, eat, dance and be… Greek!!!

Sydney music legend, Nikos Gianellis, has been playing in Sydney’s Greek live scene since he arrived in Sydney in 1966; from a young child, he loved music and over the years, he learnt trumpet and trombone, guitar and accordion.

His first official live performance was for the resident band at the nightclub, Elatos, at Paddington- which was run by Tagreas at the time. Nikos remembers, ‘In the late 1960s, there were so many Greek nightclubs in Sydney’s inner city suburbs and they were all busy. And bands and singers performed for six nights a week, in some clubs! There was lots of work for musicians.’ His musical journey had begun…

Over these heyday years, Nikos performed in most of Sydney’s popular Greek clubs. He went onto the Patris nightclub, run by Peter Scoulis and Theo Morris; in fact, he was for a few years, so he experienced five owners which meant five grand openings! There was also the Greek Taverna, run by Koutzoumis. While he was working at Panorama Night Club, the resident band backed the legendary Manolis Angelopoulos which Nikos regards as such a good person (‘Ηταν μάλαμα!’). At Salona, run by the Hatziplis family, he worked with Yiannis Vogiatzis; he remembers how the legendary, Demis Roussos, would finish his show and come later to Salona to enjoy the rest of the night. Not only did he play in Sydney, he also performed for two years in Melbourne.

Saturday nights were always crowded and busy at the nightclubs; to cater for everyone, patrons paid the band, which gave them a slip of paper and this booked them the dance-floor for a specified time- in Greek, this was called χαρτούρα. As Nikos explains, ‘When your time came up, the dance-floor was yours- no-one else could get up and dance. It gave everyone a chance to dance.’

Asked about any humorous stories from this heyday and Nikos recounts a strange incident at Panorama, ‘One night, there was a fight- which wrecked the night- and police were called; I do not know how it happened but one of the police officers lost his pistol. To check all the patrons- if they had it- the police searched everyone on their way out. One family were having a baptism there and police officers stopped the mother of the young child and checked the pram.

What did they find?

There was a large stash of cutlery, plates, ashtrays… hidden in the pram. Once she was caught out, the mother began crying; the police officers to Panorama’s owner, Giorgos Antoniou, and asked him what to do with this lady and he just replied, “What do you want me to do? Just let her go…” and they did. All her embarrassment was enough of a punishment.’

Over the years, he played with some amazing musicians like Christakis, and bouzouki players, Nikitas Naris, Manolis Michalakis (who went to Greece and played with Vicki Moscholiou) and Michalis Naxakis. As a vocalist, he has been working with Marianna for decades! It should be pointed out Nikos was also a vocalist. The last successful bouzoukia that Nikos played at was DEFI at Belmore, where he worked for six years. Nikos remembers one big night, where plates worth $15,000 were smashed, ‘The dancefllor was covered in plates, so all the patrons had to dance over them!’

As these migrants married and had families, bouzoukia were no longer so busy; people were looking for value for money to take their families out. This development gave rise to the Greek clubs, such as the Castellorizian Club, Megas Alexandros and Sydney Olympic , which offered live music and entertainment and Nikos performed at all of them.

Today, Nikos still plays live Greek music and he passionately loves it; over the years, he has learnt to play over 2,000 songs! He looks back at the heyday of the Greek music scene with nostalgia, ‘It was a very different time. Back then, the Greek migrants were missing their homeland terribly and Greek nightclubs consoled their yearning for their homeland, Greece, and all the challenges they faced here in Australia. I look back on these days with great fondness.’

*All photos by Vasilis Vasilas