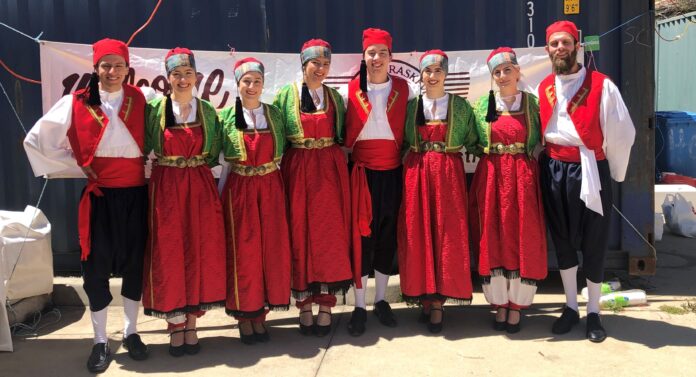 On Sunday, November 8, a special commemoration paniyiri for the liberation of Lesvos was held by the Mytilenian Association of the Canberra District at St Nicholas Church in Kingston, Canberra.

The name day of the Greek National Army and the Archangels Michael and Gabriel were also commemorated on the day.

With the support of the Mytilenian Association and the Greek Orthodox Community of Canberra, a special church service was held, followed by an amazing paniyiri with lots of music, dancing and great food.

There were 170 people in the newly erected marquee and as the ouzo flowed, guests enjoyed souvlakia and octopus and were entertained by Atalanti Dance Group from the Hellenic Club and DJ Stavro, who kept the island tunes going.

The President of the Mytilenian, Ayia Paraskevi Association, Mr Dimitris Manikas, shared his thoughts on the event stating: “Everyone helped us, young and old, and everything went well. Everyone was very happy.”

When asked about the celebrations today, the Ambassador of Greece, Mr Papacostas, shared: “With the coronavirus outbreak in Greece, there is a lockdown that does not apply to Canberra. Of course there are restrictions in Canberra, but I can see here that the community and church respect the laws. It was a very nice celebration and very well organised.”

President of the Greek Orthodox Community of Canberra, Mr John Loukadellis, added: “It was an enjoyable and important day in our history and our faith, to be able to celebrate these dual events is an honour and made our community come as one and commemorate the islands liberation and also acknowledge our Archangels.”