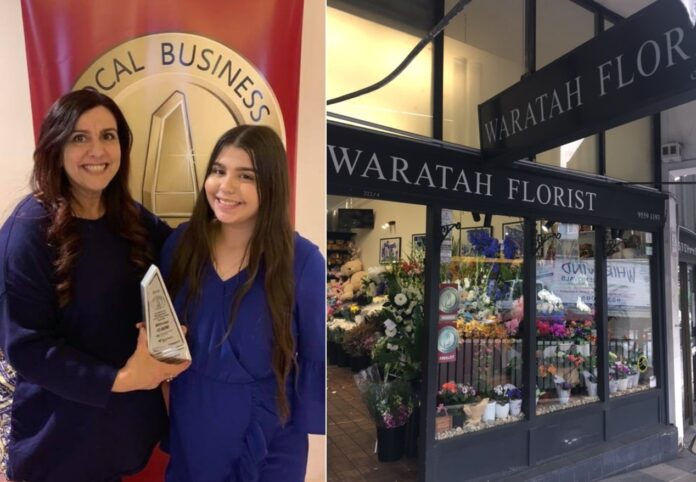 One amazing aspect in the longevity of a small business is the way it develops, over time, into an important part in the local community; for locals, it feels as though this small business has always been there to cater for their everyday needs. And it should be emphasised that this strong sense of belonging is mutually felt because the business owner also develops lifelong relationships with people and place too.

For Pauline Bertuzzi, Earlwood is simply her home, as she was born, grew up, married and set up her family home and business there… so you cannot get more local than Pauline!!! And Waratah Florists is now the longest-running Greek business in the Greek ‘village’, Earlwood!!!

Pauline’s parents, Panagiotis and Evdokia, moved to Earlwood and opened the Earlwood Fish Market in 1940 and they operated it for the next thirty years! So Pauline has experienced small business, whether with her parents and siblings or with her late husband, Paul, and their family, in Earlwood for over for eighty years! That is a lot of local history!

It was on the day of the opening of the Sydney Opera House that Pauline’s late husband, Paul, set up his florist business, which was a trailer in Sydney city; it was situated under the Union Carbide Building, on Liverpool Street, opposite Hyde Park. Pauline recounts these humble beginnings, ‘Every morning, he would go to the Haymarket markets to pick up the flowers he would sell that day. His day would at finish at 5.30… As he had a hawker’s license, he would go around, every Friday evening, to all the pubs in the area and sell his leftover flowers.’

With business continually growing, the Bertuzzi family began looking for premises- to establish a base- and as it would turn out- it was on Homer Street, Earlwood. Over the next few decades, Paul would manage three florist trailers in Sydney city, as he would pick up the flowers from the markets and drop them off at Pauline (in Earlwood) where they were prepared and then delivered to the city trailers.

Being in the city, Paul got all sorts of exposure; he gained the front window display at the Carlton Rex Hotel and promoted Waratah Florists’ flower arrangements there, and this subsequently generated a lot of interest! Over the years, Waratah Florists gained several big contracts for the flower arrangements at the balls in the Sheridan Wentworth Hotel, the Admiral Cup Dinners and the Jockey Club. Once their good reputation grew from strength to strength, so did the offers as they did the flower arrangements for the Queen and Lady Diana’s respective Sydney visits.

While Waratah Florists’ flower arrangements decorated so many iconic city stores and institutions, it should be emphasised that the engine room to this success was the shop in Earlwood, where Pauline’s sister, Mary, and Elsie Whitney worked alongside her in those early days. Pauline recounts the busy daily routine, As city ‘stores’ only sold cut flowers, Paul would bring us all the flowers (from the markets) that needed arrangement; once we finished, my sister, Mary, would have to do (as many as) three drop offs in the city every day! Do not ask me how we managed all this! I suppose we were much younger back then and we had the energy to keep up with all the demand!’

Paul Bertuzzi was undoubtedly a larger-than-life character and brought so much life to the business and the Greek community- he just had a zest for life! And Pauline pays tribute to her late husband, ‘Paul was also a social butterfly. He may have loved his flowers but his second love was music. For many years, he was the drummer in the Greek band, Ta Nea Asteria. Looking back, I do not know how he managed working nights as a drummer at social functions and then going to the markets to buy our flowers in the early morning. Did he ever sleep?

‘He was always on the go. He was proud of his Greek heritage and he was always generous in various causes- he did not have deep pockets (laughs)! Whenever there was a fundraiser, he was there; one of the most memorable events was a charity soccer match- which included celebrities such as Harry Michael, Andrew Paschalides, George Donikian and Les Murray- and he was asked to be goalkeeper.

‘One time, television personality, Harry Michaels asked me what life was like with Paul and I did not know how to answer the question. I now know, with his absence, how boring life is.’

Having grown up in Earlwood, I personally cannot remember it without the Bertuzzi family and Waratah Florists. These days, Pauline’s daughter, Anne, runs the business and Pauline continues to be there every day.

And having been part of Earlwood’s community all their lives, you can sense that Pauline and Anne’s warm connection with her customers when they walk into their shop. Such warmth and care cannot be expressed without a lifetime, in the case of Pauline and now Anne, of service to the local community.