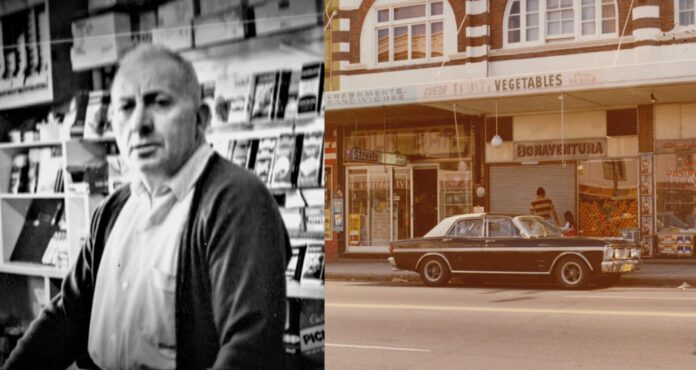 While we have focused on so many “success” stories on Greek migrants opening businesses in Sydney, it is interesting to note what it was like for their children. With so many families having shop(s)/residence(s), these children practically grew up in the shop, experiencing business first-hand from very young ages, whether it was serving customers or stacking shelves. Coming from school everyday often meant a quick break and then helping around the shop. While their school friends were off to the beach or away for summer holidays, these children remained at ‘home’ as most of these shops closed only for Christmas and New Years Day.

I recently interviewed Matina Vrontas (nee: Cassimatis), whose family ran The Mascotte Milk Bar in Petersham for thirty years (1950- 80) and got an invaluable insight of the shop experience from a child’s perspective, as Matina and her brother, Bill (Vasilis) grew up at the Mascotte.

John W Cassimatis, migrated to Australia in 1939; after working in various country towns’ cafes, John and his compatriot, Stratis Tzannes, bought the Mascotte Milk Bar in Lewisham (1950). The Mascotte Milk Bar was licensed for light refreshments and meals such as sausages and eggs and omelettes. Once John married Maria, known as Marika, Comino in 1952, he bought out Stratis’ share and the newly- married couple ran the shop; they had two children Matina and Bill.

Next to the Mascotte Milk Bar was the Bonaventura Fruit Shop, run by Laurie (Bonaventura). Once Matina was born, Marika’s sister, Zoe, came down from Brisbane to look after the newborn baby; she met Laurie, fell in love and they married. So, Marika and Zoe also became neighbours!

As children, the Mascotte was part of Matina and Bill’s everyday lives, as Matina recalls, ‘My brother and I grew up in our shop; as children, we helped out in whatever way we could whether it was typing menus or stacking shelves. Every Friday, I would have to boil our chocolate flavouring. They were very different times too (laughs); as children, we would sell cigarettes to our customers!’ Different times, indeed!

Growing up in these shops also taught these children to grow up quicker than other children; there was always added responsibility of looking after their shop while their parents had other obligations. Matina fondly recounts the children’s ability to run the shop in their parent’s absence, ‘One time, my parents had to go to Brisbane for a weekend- they had to attend a wedding- and Bill and I stayed behind. Uncle Nick (Logothetis), whose family ran the Town Hall Milk Bar, in Marrickville, came to look after us; he was gobsmacked to see a twelve and ten year old running the shop! Bill and I did not think anything about this; stock control and ordering, and setting up displays was just what we did.’

And the children had to always be back for their shop’s busy periods! With the Odeon movie theatre just up the road; for Bill and Matina, watching a movie was all about the timing, ‘Bill and I would often go to the movies at the Odeon- how many Elvis Presley movies did I see there- and we would have to run back to the shop at the (movie) interval before the customers got there. We would then have to rush back after all the customers returned to the picture theatre, hoping we did not miss the first few minutes of the next film (laughs)!’

After thirty years, John and Marika sold the business in 1980; Matina and Bill had already moved onto their respective careers. Matina, however, emphasises how invaluable the experiences of growing up in the Mascotte were in the way it exposed Bill and her to business and everyday life from a young age.