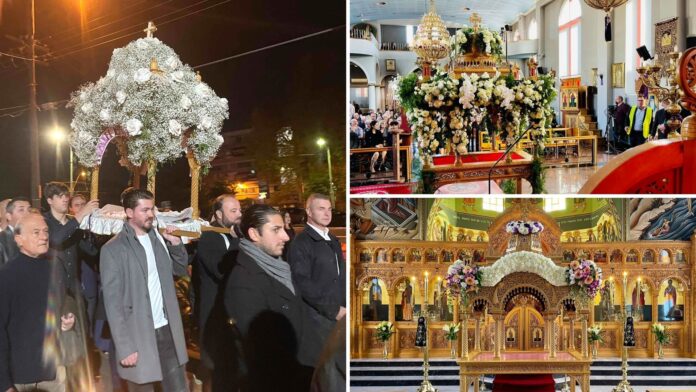 One of the most widely attended rites on Good Friday is the Epitaphios threnos (funerary lamentation). The word epitaphios is an adjective meaning “funerary, happening on a grave”, originating from Thucydides’ famous “Pericles’ Funeral Oration”.

Within a liturgical context, this is also the name of an icon, usually made of cloth and richly embroidered, depicting the body of Christ being laid in the grave, often by the Virgin Mary and some disciples.

On Good Friday morning, the icon is placed on a platform, resembling a bier, typically topped with a kouvouklion, an elaborately carved wood canopy. In the evening the service begins; near the end of the ceremony, the canopied platform bearing the icon is lifted on the shoulders of priests or churchgoers (usually four to six people) and carried through the streets.

After the COVID-19 pandemic saw people celebrate Easter from home last year, thousands turned up to churches across Australia to bless the Epitaphios.

The Greek Herald has compiled a gallery of Epitaphios from Greek churches in Sydney, Canberra, Melbourne, Adelaide and Darwin.

The St Nektarios Church in Burwood held their Good Friday Lamentations and traditional Procession with Mayor of Burwood, Cr John Faker, and Member for Strathfield and Leader of the Opposition, Ms Jodi McKay MP, in attendance, as well as His Eminence Metropolitan Seraphim of Sevasteia.