The Greek War of Independence through your eyes: Meet our competition winners 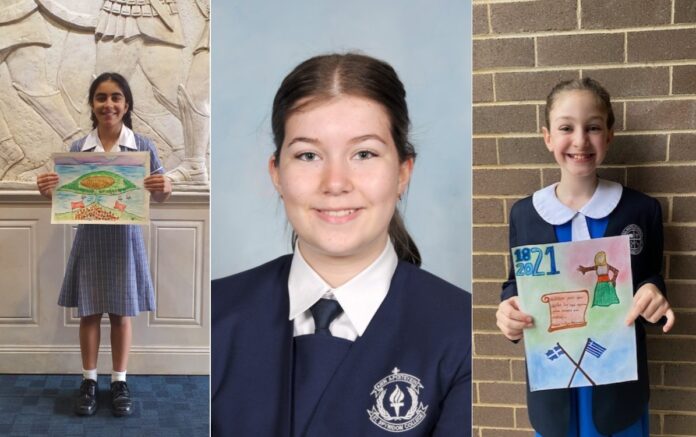 In the weeks leading up to March 25th, we asked you to celebrate by getting your children, friends and neighbours involved in remembering and honouring this iconic piece of Greek history.

Well your children certainly seemed encouraged, because The Greek Herald received plenty of submissions for the competition: The Greek War of Independence through your eyes.

For the competition, we asked you to any piece of writing or artwork that conveys the history of the Greek War of Independence. The Greek Herald received many incredible submissions, including detailed artworks, delicate poems and historical pieces.

The Greek Herald would like to congratulate Zoe Sigrimis (11), Chrysoula Kirkis (14), Emmanouela Kalaitzidi (10) as the winners of the competition and a $100 Westfields Gift Voucher!

Zoe Sigrimis drew an artwork that perfectly represents the battle at Missolonghi. In the photo, the Turks are at the Missolonghi doorway, facing in front of them the Greek resistance fighters. The Missolonghi sieges were some of the longest battles during the Greek revolution.

Here’s what Zoe had to say after finding out she had won:

“I’m happy…kind of surprised because I didn’t expect to win. I was proud just to create this work to show what I’ve learnt about the Greek revolution.”

Emmanouela Kalaitzidi was another artistic winner who drew the famous Laskarina Bouboulina, one of Greece’s finest warriors of the Greek War of Independence. A Greek naval commander, she spent most of her riches to supply ammunition and food for sailors and soldiers under her command.

Here’s what Emmanouelahad to say after finding out she had won:

“I feel very happy and proud about winning the art competition.”

“I drew a heroine who played a very important role for the Greek Independence. From this competition, I have learnt that Rigas’ Velestinlis poem, Thourios, motivated the Greek people to fight for our freedom.”

Chrysoula Kirkis wrote a beautiful poem titled ‘The Great and Visual Journey’, which looks to give readers exactly that. The poem describes in great detail the moments of patience, fear and most importantly, hope, experienced by the resistance fighters.

Here’s what Chrysoula had to say after finding out she had won:

“I can’t believe that I’ve won. I feel shocked and I feel ecstatic for this achievement.”

“My Greek teacher introduced this competition to us, and she told us that we’re celebrating 200 years of independence. I really felt moved and I felt a strong sense of pride and I wanted to take part and reflect upon my Greek roots and how I feel about them.”

“I’d also like to thank The Greek Herald for giving us, the second generation and third generation Greeks, this wonderful opportunity. And I would also like to give a thanks to my family for supporting me to learn about my Greek identity as well as my teachers.”