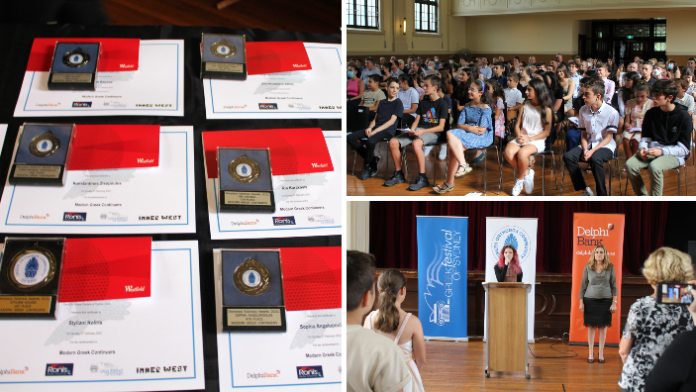 Young students were recognised for excellence in Modern and Classical Greek at the annual Dionysios Solomos Awards on Sunday, February 27 at Marrickville Town Hall.

The awards are organised by the Greek Orthodox Community of NSW (GOCNSW) as part of the Greek Festival of Sydney.

They celebrate the achievements of Year 12 students who received the highest grades in Greek in the Higher School Certificate (HSC), as well as younger students from the Greek Orthodox Community of NSW Afternoon and Saturday Schools.

On the day, roughly 150 people were in attendance including the NSW Shadow Minister for Small Business, Property and Multiculturalism, Steve Kamper; the Consul General of Greece in Sydney, Christos Karras; Associate Professor of Modern Greek at the University of Sydney, Dr Anthony Dracopoulos; the Sir Nicholas Laurantus Chair in Modern Greek and Byzantine Studies at the University of Sydney, Professor Vrasidas Karalis; the Treasurer of the GOCNSW, Chris Belerhas; and the Festival Chair of the Greek Festival of Sydney, Nia Karteris.

Master of Ceremonies, Vicki Tomaras, kicked off the official proceedings with a small welcome, followed by an introduction to student, Anja Ribbeck, who approached the stage to perform the National Anthems of Greece and Australia.

A number of speeches were then given by the Secretary of the GOCNSW, Michael Tsilimos, the Consul General, Steve Kamper MP, Professor Karalis and student, Dean Theodoroloulos, who received the Minister’s Award of Excellence 2021.

In their speeches, Mr Tsilimos stressed his belief that Greek students will continue to excel in the HSC in Modern and Classical Greek, while the Consul General spoke about the continued relevance of Greek to the English language.

For his part, Steve Kamper MP said he was “so proud” of the young students and parents in the room for persevering and continuing to learn the Greek language.

One student, Suelen Grillas from Danebank Anglican School, won an Outstanding Achievement Award and told The Greek Herald after the event she felt proud to be recognised because “I like all things Greek.”