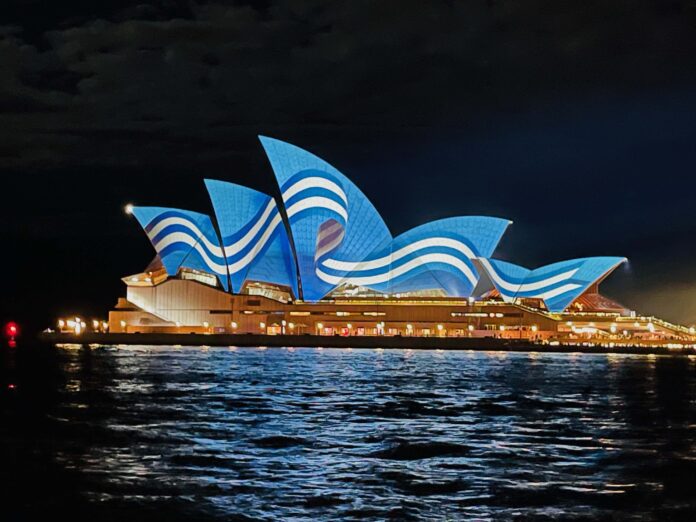 Greeks of Sydney observed the Sydney Opera House in awe last night as the historic Australian landmark was lit up with a waving Greek flag to mark 200 years since the War for Greek Independence.

In an offical ceremony led by Acting Minister for Multiculturalism Geoff Lee, a host of dignitaries spoke about the importance of recognising the Greek peoples contribution to Australia.

“Tonight is just a symbol of our appreciation for all your hard work, your achievements in business, academia, and sporting right across our community,” Minister Lee said.

“Today is a day you don’t just celebrate 200 years of Greek independence, we celebrate the contribution many of you of Greek heritage have made to NSW, an outstanding contribution,” the NSW Premier said.

“NSW wouldn’t be the strong state it is without the contribution of Greek Australians.”

“We are very proud to celebrate on the opposite side of the world to Greece, because our hearts are one with Greek people around the world as we celebrate this wonderful milestone,” the Premier concluded.

Consul General of Greece in Sydney Christos Karras said the lighting of the Opera House honours not only Greek Australians, but Greeks all over the world.

“Today, as we commemorate this landmark bicentenary, we also celebrate the long friendship between Greece and Australia,” Karras said.

“We celebrate our common values that bind us as friends and we honour the great contributions Greek Australians have made to multicultural Australian society”.

Representing His Eminence Archbishop Makarios, Fr Christophoros Krikelis spoke about the relationship between the Feast of the Annunciation and Independence day, with both representing the freedom of the Greek people.

“The 25th of March has forever been engraved in the eclectic consciousness of our people, and serves as a reminder of the inseparable relationship between our Hellenic nation and our Orthodox faith,” Fr Krikelis said.

The ‘next generation’ of Greek Australian leaders, a group of school children, counted down from ten in Greek to light up the Sydney Opera House.

While parliamentary and religious dignitaries gazed upon the Opera House from the other side of the harbour, below the Australian monument was a sea of Greek Australians celebrating this iconic moment in history.

The Greek Herald spoke with a few members of the Greek Australian public, who were seen parading and dancing in front of the Sydney Opera House.

“There is nothing better than being Greek and feeling proud to be Greek,” a member of the public, Vicki, said.

“We thank Sydney, Australia, and the world that we have this opportunity to be here tonight and we stand with Greece as they go through so much. We are one, we love you.”

As the flag on the Sydney Opera House waved, flags on the ground waved in unison. Many community members had Greek flags stretched across their back, with a few children handing them out for free to the local community.

“This just shows what the Greek people have done for Australia and continue to do here,” Nick said.

“This something that doesn’t happen all the time, it’s simply amazing,” Mary said.

Greek music filled the Sydney Harbour as different celebrations raged on across the Sydney CBD. Following speeches by the dignitaries, a lyra player performed for a gathering crowd of Greek and Australian audiences.