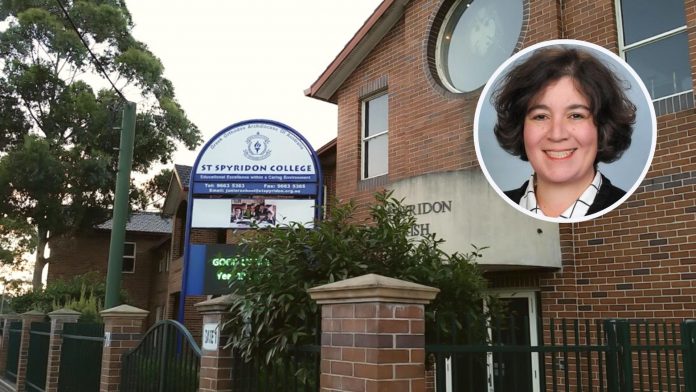 The Principal of St Spyridon College’s junior school in Kingsford, Sydney has announced that she will be leaving her position after 32 years to spend more time with her family.

In a letter obtained by The Greek Herald and shared with parents on Friday, July 29 via the school app, Mrs Aristea Synesios said the COVID-19 pandemic had given her the opportunity to reflect on her life and “prioritise what is important.”

The outgoing Principal said she would miss the children the most as “they have given me so much more than I could ever have given them and I have learned so much from them.”

“Many thousands of children have been welcomed through the gates of the Junior School and I have been privileged to nurture and watch them grow into people of faith and tradition who are making positive contributions in society,” Mrs Synesios said in her letter.

“The greatest reward for me is when a child you have taught returns with their own child or, they are now a teacher of my child. I see them not as my students but as my children and grandchildren and you, their parents, members of my family. This is what makes our school unique.”

The announcement has been met with disappointment by some school parents with a change.org being set up to express their “disappointment, distress and grave concerns” regarding Mrs Synesios’ “sudden and unexpected departure,” and to call for an explanation “from the Parish President and the Parish Board.”

So far, the campaign has been signed by over 720 people.

In response, Head of College, Mrs Amelia Katsogiannis, sent a letter to parents this afternoon thanking Ms Synesios for her service and attempting to alleviate the concerns of some parents.

“I am aware that some parents are concerned at the suddenness of Mrs Synesios’ departure, and that the news has been a surprise. I wish to assure you that we already have the team in place to ensure the very best education and care for your children,” Mrs Katsogiannis said in her letter.

“I thank the many parents who have already expressed their support and faith in my leadership. As the Head of College of our KM1 to 12 school, I will continue to take an active role across the entire College.”

In a statement to The Greek Herald, Parish Board President, Elia Economou, said: “The St Spyridon School community wish Mrs Synesios all the best in the next chapter of her life, and we express our deepest gratitude for her decades of service, to generations of families.”

“While Mrs Synesios’s departure has been sudden, the Head of College, Mrs Katsogiannis, together with Deputy Principal Junior School, Mr Dookie and a range of leading co-ordinators are providing continuity in the education and care of all the students in the Junior school.”