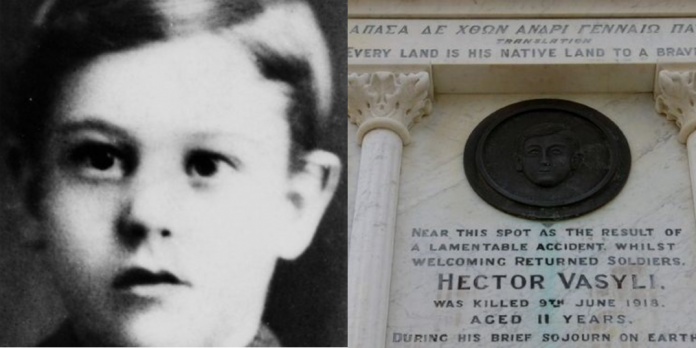 On 9 June 1918, a young Greek Australian boy, Hector Vasyli, was fatally injured in a shocking accident.

The 11-year-old was among a crowd of people welcoming sick and injured soldiers en route to a military hospital at Kangaroo Point, when a vehicle swerved into him near Brisbane’s Victoria Bridge to avoid ramming another car in the procession.

Hector was rushed to a nearby hospital for treatment for a fractured skull but died before getting help.

Despite such a short life, Hector, a newspaper boy and dedicated altar boy, was well known amongst the Queensland community, particularly for his patriotism.

According to the State Library of Queensland’s senior research librarian, Christina Ealing-Godbold, Hector nearly reached saint status following the accident because of his actions before he was hit.

“Hector had a habit of collecting his pocket money and spending it on cigarettes, chocolates and flowers to give to the returning troops,” Ealing-Godbold told the ABC.

“We might look back and think cigarettes weren’t good for these injured soldiers, and chocolate was probably worse, but in those days it was just a sign of respect and knowing the luxuries they missed out on during the war.”

Ms Ealing-Godbold added that Hector’s parents ran the Queensland Oyster Palace in South Brisbane, only a short distance from Victoria Bridge, and consequently, Hector would have been used to dodging trams, horse-drawn buses and the occasional car.

“He had, on many occasions, stood on the bridge and thrown cigarettes and chocolates at previous returned soldiers’ processions. I think it’s probably just a very tragic accident he was at the spot he was at the time,” she said.

The memorial, fixed on an abutment at the southern end of the bridge, carries a likeness of the boy’s face cast in metal and an inscription that reads:

“During his brief sojourn on earth he devoted much of his time to patriotic work for Australian Soldiers during the Great European War. In his veins ran the heroic blood of Greece, and in the breast of a child he carried the heart of a man.”