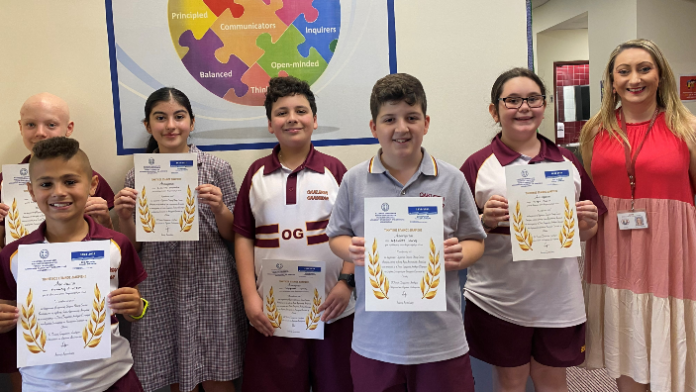 Students from Oakleigh Grammar School have actively participated in and received excellent results in various competitions organised by different Greek community organisations throughout the year.

Junior School students had the opportunity to participate at the annual Greek Public Speaking Festival organised by the Modern Greek Teachers’ Association of Victoria. The students had to recite a Greek poem dedicated to the Greek Revelation of 1821.

The Organisational Committee for Greek National Day, under the auspices of the Greek Orthodox Archdiocese of Australia and in conjunction with the General Secretariat for Greeks Abroad, also hosted a state-wide student and youth competition titled “Ambassadors 200.”

The aim of this competition was for the youth of Victoria to have the opportunity to actively participate in the celebration of the 200th anniversary of the beginning of the Greek Revolution. Participants were asked to explain what 1821 means to them.

Each participant had the opportunity to present their views through an essay, a poem, a drawing, a PowerPoint presentation, a poster, an interview, a song, a painting or an object.

From Oakleigh Grammar, 111 students submitted some amazing projects and 64 of those students won and achieved the title “Ambassador” for 2021.

Further to this, students from Year 5 to Year 9 had the opportunity to participate in the annual competition called “Student Competition for Pontian Hellenism and the Greek Genocide.”

The aim of this competition is to give students the opportunity to conduct their own research to learn, describe, comment and illustrate an understanding of topics relating to the Hellenic presence that existed in the East, the reasons why communities were forcibly uprooted from their ancestral lands, and the aspects of their culture and identity that survived.

Students submitted some amazing work and the winners were:

“We would like to congratulate all students who took part and represented Oakleigh Grammar in these state-side competitions, presented such remarkable projects and achieved some outstanding results,” Natasha Spanos, the Acting Head of LOTE and the SRC & Hellenic Culture Coordinator, said in a press release.

“We would also like to warmly thank all the community organisations that conducted these competitions.”