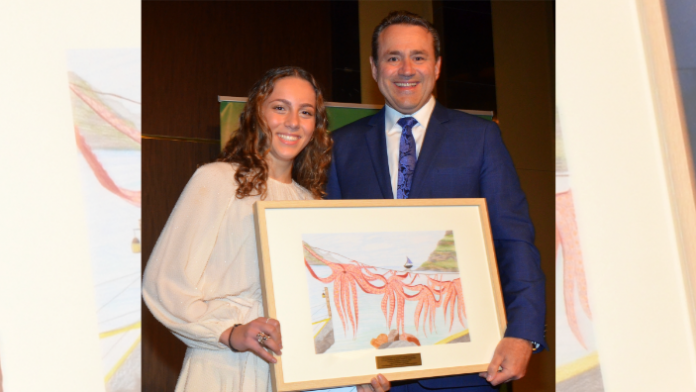 The NSW Federation of Community Language Schools hosted its 2021 Annual Gala Dinner on Saturday 16 June 2021 at the Bankstown Sports Club.

The gala community event featured traditional performances by students, delicacies from around the world, speeches from special guests, messages from the Prime Minister and the Premier of NSW and a special presentation for the winners of the Art and Film Competition.

Addressing the attendees minister for Customer Service and inaugural Minister for Digital, Victor Dominello, who represented the Premier of NSW Gladys Berejiklian and Minister for Education and Early Childhood Learning Sarah Mitchell spoke about the importance of community language schools and their contribution to the state’s multicultural character.

“In a world that’s constantly changing we need anchors and your heritage, your identity is a critical anchor,” said Dominello, explaining that it took him a while to embrace his Italian background.

“If it wasn’t for the community language schools Australia would be a big hole. This country owes you gratitude,” said the newly elected Leader of the Opposition.

In his speech, Steve Kamper expressed his pride for his Greek background and thanked the teachers, students and volunteers for their efforts.

“I am of Greek background and I am a beneficiary of the community schools,” said Kamper.

During the event, year 9 student Maria Moutopoulos was presented with an award for the second Prize she won at the Student’s Art Competition in the 13 to 18 years old category.

“Maria’s painting was what she remembered from a trip we went to Greece two years ago. At Sounio, she saw an octopus hanging in the sun and this is what she drew,” Nicolette, Maria’s mother, told The Greek Herald.

“It’s very important to pass the language to the next generation so they [the children] know where they come from and have some sort of purpose. I always tell my kids being Greek is what makes you, you.

“It’s also important for them to travel to the country and bond with the culture and their relatives. I felt very proud for Maria’s award,” said Nicolette.

Maria’s artwork will soon be showcased at the NSW Parliament House.