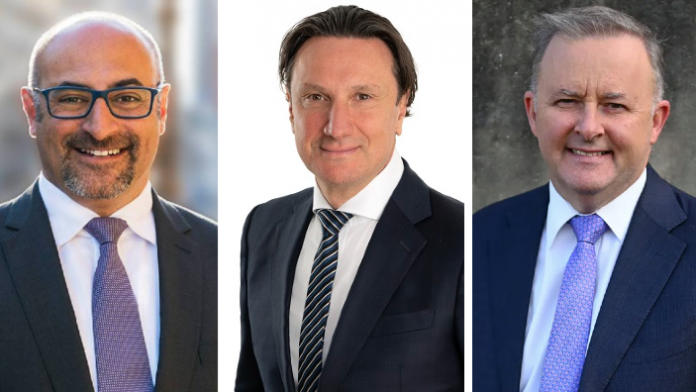 Federal Labor Leader, Anthony Albanese, along with the President and Board members of the Greek Orthodox Community of Melbourne and Victoria (GCM) held a meeting on Friday morning organised by Peter Khalil MP.

During the meeting, the President of the GCM, Bill Papastergiadis, stressed to Mr Albanese the need for clear guidance from the government on Australia’s borders, vaccination passports, education and quarantining at home.

Mr Albanese agreed and said that although he supports the Federal Government’s National Recovery Plan, Australia does need to open borders at some stage and further support community languages and multicultural communities.

On the topic of borders, Mr Albanese was asked about the Labor Government’s plans to help those members of the Greek community, who wish to return to Greece to live or visit ill family members but are not allowed to leave Australia.

“We need to recognise people as human beings and individuals with real needs and for many of them, it is so important that they are able to visit relatives,” the Labor Leader said.

“They’re going with the knowledge that there might be a problem with them coming back. They’re adults, they’re able to make those decisions. I think there needs to be more compassion shown there as well.”

Mr Albanese went on to say the Labor Government have made representations for people to try to visit their loved ones overseas, but it’s proven to be ‘very difficult.’

He also gave a personal example of how he understands people’s frustration with the border restrictions as he himself was unable to attend his father’s funeral in Italy in 2014.

“I don’t understand how in some cases you see some people who seem to be able to just come and go, and others who want to visit perhaps their mum or dad who’s not well and in some cases, let’s be honest, to say goodbye and that’s a basic human need that people have,” Mr Albanese said.

“Labor will continue to argue for an appropriate response. We understand that there are restrictions on borders… but individuals need to have personal circumstances taken into account.”

Greek Language and the Arts:

From here, the Labor Leader went on to discuss the Federal Government’s support for education, community languages and the Arts during the COVID-19 pandemic and stressed that these areas have fallen through the cracks.

“We need to support education and the Arts and it’s a real pity that they missed out on JobKeeper. A lot of the Arts, particularly in multicultural communities which can be professional but not as regular in terms of casual employment, they just missed out,” Mr Albanese said, giving an example of The Hellenic Art Theatre in Marrickville.

In saying this, Mr Albanese did commend the Greek community however, on how they have been able to maintain their Greek language and culture through generations, as well as during the pandemic.

“I think the Greek community, from my experience, is better than most, I’ll say that. With Greek language schools, with making sure that culture is there…” he said.

“One of Australia’s greatest assets is our multiculturalism… and the fact that we’re a multicultural nation with language skills needs to be seen as something which doesn’t just benefit the Greek community, in terms of the Greek language, that’s a plus for us in terms of our economy, being able to do business into the region and into the world.

“We know the world is becoming a smaller and smaller place and different language skills are so important for us.”

The meeting concluded with Mr Papastergiadis thanking Mr Albanese for this support of multiculturalism and the Greek language.

“It was a fantastic meeting. Mr Albanese gave 1.5 hours of his time today, he was in great spirits, he wanted to continue the conversation with the Greek Centre once we open up, he wanted to be at the Festival… and he’s looking forward to a meeting one-on-one,” Mr Papastergiadis told The Greek Herald after the meeting.